A climate scientist who specializes in modeling tropical convection systems, Kuang holds a joint appointment in the Harvard School of Engineering and Applied Sciences (SEAS) and in the Department of Earth and Planetary Sciences (EPS). His work investigates how tropical convection interacts with large-scale atmospheric flow, and how fluctuations in that system can bring about rainfall or drought.

In 2010, he coauthored a study which challenged the conventional view that South Asian monsoons were caused by a massive release of heat from the high-altitude Tibetan Plateau. With colleagues in EPS, Kuang created a model of atmospheric circulation and demonstrated that the insulating barrier of the Himalayas is just as capable of producing a monsoon, without the influence of the Plateau.

The implications of that research extend to land use in South Asia and the future of the region's water supply.

Kuang also studies and simulates the El Niño Southern Oscillation with the goal of understanding both its meteorological effects and its impact on global chemistry.

His work has the potential to affect the lives of billions of people worldwide.

Currently an Associate Professor of Climate Science, Kuang teaches in the areas of Environmental Science and Engineering and Applied Mathematics at SEAS. He is also a faculty associate of the Harvard University Center for the Environment.

Kuang's contributions to research and teaching, which earned him the American Meteorological Society's 2011 Clarence Leroy Meisinger Award for "outstanding ability," span a variety of disciplines, including applied computational science, oceanography, and geophysics. 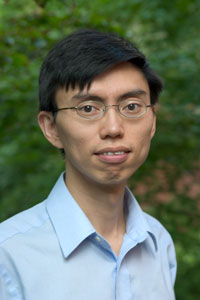