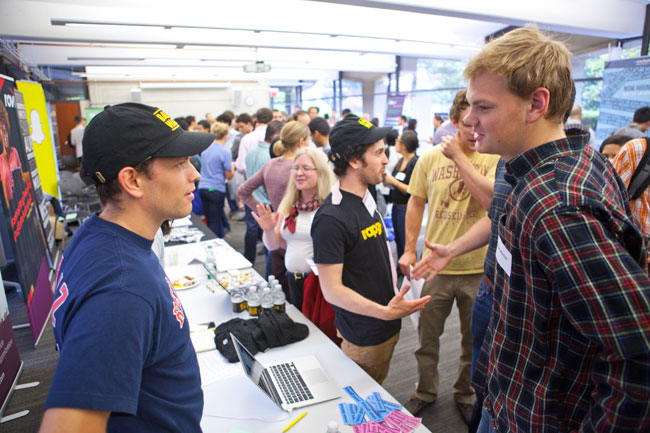 Engineers on the job market, take note: it’s not about what you know, but how you think.

So said a panel of industry experts who gathered last Friday at a Big Data, Technology, & Engineering Fair hosted by the FAS Office of Career Services and co-sponsored by the Harvard School of Engineering and Applied Sciences (SEAS).

The term “big data” captures only one half of what’s driving technology these days, the speakers said; true progress takes big ideas.

A high school’s attendance records and test scores can fade to yellow in a filing cabinet, or they can be put to work, said Kate Sandel, a strategic data fellow at the Massachusetts Department of Education. A sharp mind can glean enough insight from those resources to identify at-risk students before they drop out of school, or even to turn around an underperforming district.

Emmanuela Gakidou AB ’95, SM ’97, Ph.D. ’01, also has a leader's vision. As the director of education and training at the University of Washington’s Institute for Health Metrics and Evaluation, she analyzes statistics on mortality and medical costs, manipulating hundreds of millions of data points to find new ways to improve health care.

The game is moving “from big data to actionable data,” said Robin Opie, senior vice president for product and analytics at Datalogix, a market research firm that uses population-level data to “connect the dots between offline behavior and online exposure.”

And they’ve got it down to a science. Literally.

Data analytics is no longer about conducting focus groups, building databases, and simply searching for correlations; rather, it has blossomed into the academically rich and intellectually challenging field of computational science and engineering, which blends elements of computer science, applied mathematics, and statistics with domain expertise in fields as diverse as physics, social science, and medicine.

“The opportunities are around good question-askers,” said Peter Fishman, director of analytics for the social networking company Yammer, which was recently acquired by Microsoft. He told the audience of graduate students and postdoctoral fellows that their inquisitive minds, as much as their practical skills, would be in high demand.

“You’re learning how to take the scientific approach to a data set,” he said, “and that’s actually not very common.” 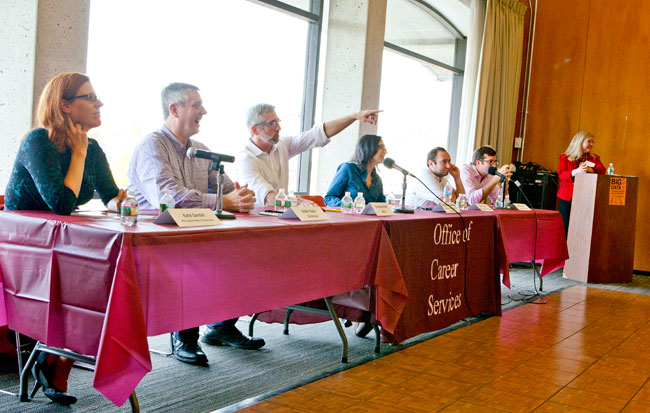 Now, said Matthew Emans ’96, founder of Integral Reach (now part of Rovi Corp.), employers are most interested in building new types of infrastructure that can handle petabytes of data, designing algorithms that can “distill intelligence” from that data, and crafting smart visualizations to communicate it meaningfully.

Paul Haverstock, vice president of data and analytics at Nokia, stressed the importance of “people who can think deeply but can also apply that to people’s lives.”

“In the end,” he said, “the whole point is to create some insight.”

The panel discussion was followed by a question-and-answer session, as well as a career fair with approximately 70 employers—including several companies founded by Harvard alumni.

Alexander Isakov ’11, a Ph.D. student in physics, asked the panel what they thought of the prospects for independent entrepreneurship. He dreams of developing new algorithmic approaches to data-driven marketing and forming a company of his own.

“Do it,” Haverstock immediately replied. “If you’ve got that bug in you, go do it.”

Isakov later said he was thrilled to hear “senior scientists and people who are senior in the big data field say that we should pursue our ideas—that this is a very fast-growing field, and that they’re very happy to use the ideas we have for real-world applications.”

Muxi Li also found the event to be an affirming experience. Originally from China, she is one of 24 students in Harvard SEAS’ first class of master’s candidates in Computational Science and Engineering.

“I think my skills are very desirable,” she said, having shown her résumé to several recruiters who encouraged her to apply for open positions. “My concern is whether I can survive the interviews!”

Speaking with potential employers at the career fair, she said, allowed her to practice discussing her abilities and allayed her fear that she might unknowingly lack some essential skill—perhaps a programming language she had never learned.

“They just told me that they don’t look for complete versatility,” she said, visibly relieved. Instead, their advice was to “concentrate on how you can apply your knowledge.”

Many of the recruiters were once Harvard students too, anxious about their job prospects and uncertain about their own interests.

Iva Maxwell, Ph.D. ’06, has worked for Meso Scale Diagnostics since she earned her doctoral degree at Harvard seven years ago. As a student in Prof. Eric Mazur’s laboratory, she built a femtosecond laser system to perform nanosurgery on living cells. She credits that experience—applying engineering principles to solve biological questions—for her success in finding a career she loves.

She advises job-seekers not to fear the unknown: “Just explore everything that you’re interested in and then don’t be too shy to say, ‘I’m interested in this, and even though my experience is not a hundred percent related to it, this is why I’m prepared to take it on.’”

Recruiters throughout the career fair echoed that advice, urging students to avoid overspecializing in a single technique, but to remain flexible and aware of the changing needs of complex real-world problems.

As Haverstock, of Nokia, quipped: “Ten years from now, I won’t be qualified to do this job…. It’ll be somebody like you.”