CAMBRIDGE, Ma. and NEW YORK, N.Y. – Jan. 20, 2016 – During a 2014 talk on his exploration of deep sea coral reefs, Baruch College marine biologist David Gruber showed a video of clunky robotic hands collecting fragile specimens of coral and sponges from the ocean floor. Harvard engineer and roboticist Robert J. Wood was in the audience – the two scientists were being recognized as Emerging Explorers by the National Geographic Society – and a lightbulb went off.

“They were using rigid Jaws of Life-type grippers deigned for the oil and gas industry that were totally overpowered and were destroying things,” Wood recalls. “It immediately clicked that there was a soft robotics solution that may be viable.”

In the months that followed, the pair collaborated to design, fabricate, and test soft robotic grippers for deep-sea collection of fragile biological specimens. Their recent expedition to the Gulf of Eilat in the northern Red Sea, a unique marine ecosystem that houses one of the world’s largest and most diverse coral reefs, marked the first use of soft robotics for the non-destructive sampling of fauna from the ocean floor. 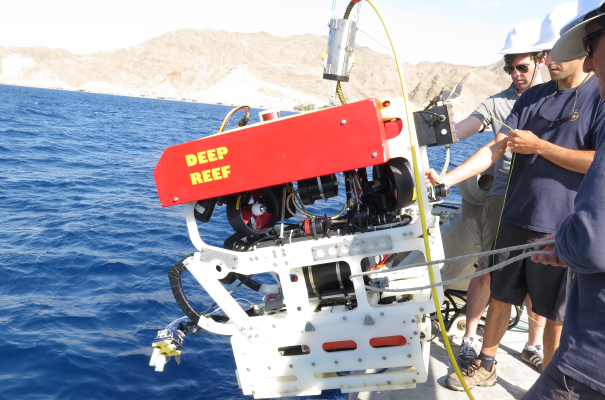 Soft robotic gripper is attached (lower left) to the remotely operated vehicle (ROV) as it is lowered into the Red Sea for a test dive. (Photo courtesy of Kevin Galloway, Wyss Institute at Harvard University.)

The new technology could enhance researchers’ ability to collect samples from largely unexplored habitats thousands of feet beneath the ocean surface, areas that scientists believe are biodiversity hotspots teeming with unknown life. The soft grippers also could be useful in underwater archeology.

As described in a paper published today in the journal Soft Robotics, the team successfully developed two types of grippers, and in the process demonstrated a new fabrication technique that allows for the rapid creation of soft actuators.

Gruber, associate professor of biology and environmental science at Baruch College, City University of New York, and research associate with the American Museum of Natural History, explores deep ocean ecosystems, with a particular focus on organisms that display bioluminescent and biofluorescent traits. (Bioluminescent animals produce their own light; biofluorescent animals absorb light and re-emit it as a different color.)

When he wants to visit a coral reef below the maximum depth that human divers can tolerate, Gruber must rely on a remotely operated vehicle (ROV). But there’s a problem: the standard-issue robotic “hands” of underwater ROVs are ill-suited to collecting delicate coral, sponge, and other samples. That’s because the equipment was designed for undersea construction and to install and repair submerged pipelines.

Manipulating and grasping fragile organisms from the sea floor requires something that can mimic the dexterity and soft touch of a human diver’s hand. Wood, Charles River Professor of Engineering and Applied Sciences at the Harvard John A. Paulson School of Engineering and Applied Sciences (SEAS) and founding core faculty member of the Wyss Institute for Biologically Inspired Engineering at Harvard University, recognized that soft robotics is tailor-made for the task.

Wood and Wyss Institute mechanical engineer Kevin Galloway set about designing two types of hands to replace the ROV’s factory-furnished metal gripper, each capable of gently recovering objects of different sizes and shapes. One, inspired by the coiling action of a boa constrictor, can access tight spaces and clutch small and irregular shaped objects. The other, a bellows-style model, features opposing pairs of bending actuators.

To facilitate rapid in-field modification and repair, the team emphasized simple construction, inexpensive materials, and a modular design. This meant they could try multiple configurations and make them in quantity. Harvard's Office of Technology Development has filed a patent application on the team’s method for the manufacture of bellows-type soft actuators. The method is scalable, opening up a wide range of commercial, biomedical and industrial applications for this type of actuator. 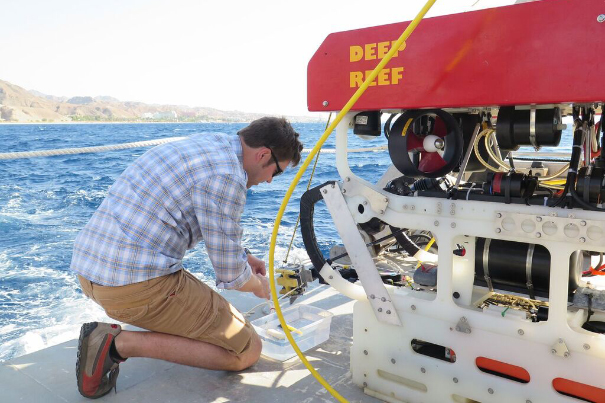 The biggest design challenge, Wood said, was a lack of precise specifications. They weren’t designing a robotic arm to repetitively attach doors to car bodies in an auto assembly plant. The team had no way of knowing the size, shape, or stiffness of the objects they would be sampling on the ocean floor. To approximate likely specimens, they visited the produce aisle and brought back an assortment of vegetables – celery, radishes, carrots, bok choy – tied them to a metal grate, and dropped it into a test tank at the University of Rhode Island. After exhaustive tank tests, the devices were put through their paces at depths greater than 800 meters off the Rhode Island coast.

Field testing took the team to Israel’s Gulf of Eilat in the northern Red Sea in May 2015. There they conducted more than a dozen dives ranging from 100 to 170 meters (558 feet, or as deep as the Washington Monument is tall). Most dives involved “catch and release” maneuvers to test system performance. But they did manipulate the grippers to retrieve samples of delicate (and relatively abundant) red soft coral, as well as difficult-to-snag coral whips, bringing them to the surface undamaged in the ROV’s cargo tray. 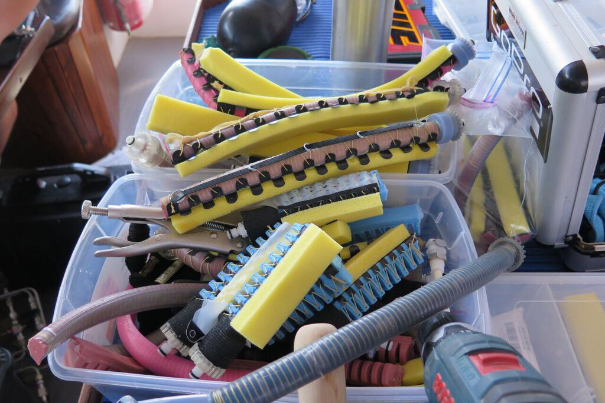 But simply collecting hard-to-harvest samples isn’t the end game. Researchers like Gruber hope to apply these techniques to conduct in situ measurement of organisms, and eventually, gene expression and transcriptomic analysis. Conducting this work on the seabed floor rather than bringing samples to the surface, means that organisms are not exposed to stress from changes in temperature, pressure, and light and there is less disturbance to the reef system.

On the robotics side, Wood has a list of performance enhancements he hopes to pursue. Current-generation ROVs rely exclusively on visual feedback – a live video feed from an onboard camera – but he’d like to add haptic feedback, applying his lab’s expertise in soft sensors to let an operator actually “feel” what the gripper is touching. He is also interested in experimenting with bilateral, rather than single-arm manipulation to achieve improved dexterity. Finally, the team wants to go deeper – literally. During the Red Sea dives, the system operated at depths under 200 meters. They envision conducting field work in unexplored worlds 6,000 meters below the surface.