Last summer, researchers at the Harvard John A. Paulson School of Engineering and Applied Sciences (SEAS) announced a new, flat lens that could focus light with high efficiency within the visible spectrum. The lens used an ultrathin array of nanopillars to bend and focus light as it passed.

The announcement was hailed as a breakthrough in optics and was named among Science Magazine’s top discoveries of 2016.

But the lens had a limitation – it could only focus one color at a time.

Now, the same team has developed the first flat lens that works within a continual bandwidth of colors, from blue to green. This bandwidth, close to that of an LED, paves the way for new applications in imaging, spectroscopy and sensing.

The research is published in Nano Letters.

One of the major challenges in developing a flat, broadband lens has been correcting for chromatic dispersion, the phenomenon where different wavelengths of light are focused at different distances from the lens.

"By harnessing chromatic aspects, we can have even more control over the light,” said Reza Khorasaninejad, a Research Associate in the Capasso Lab and first author of the paper. “Here, we demonstrate achromatic flat lenses and also invent a new type of flat lens with reverse chromatic dispersion. We showed that one can break away from the constraints of conventional optics, offering new opportunities only bound by the designer’s imagination."

To design an achromatic lens — a lens without chromatic dispersion — the team optimized the shape, width, distance, and height of the nanopillars that make up the heart of the metalens. As in previous research, the researchers used abundant titanium dioxide to create the nanoscale array. 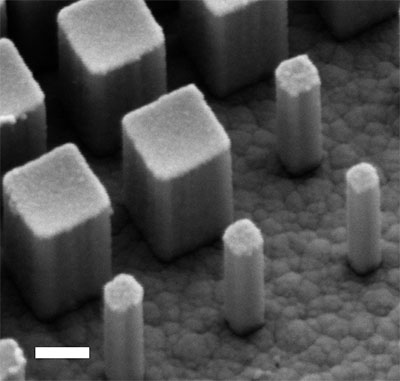 A scanning electron microscope image shows a side-view of the metalens, with nanopillars optimized to focus colors without chromatic dispersion. Scale bar: 200 nm. (Image courtesy of the Capasso Lab/Havard SEAS)

This structure allows the metalens to focus wavelengths from 490 nm to 550 nm, basically from blue to green, without any chromatic dispersion.

“This method for dispersion engineering can be used to design various ultrathin components with a desired performance,” said Zhujun Shi, a PhD student in the Capasso Lab and co-first author of the paper. “This platform is based on single step lithography and is compatible with high throughput manufacturing technique such as nano-imprinting.”

Harvard’s Office of Technology Development has filed patent applications on a portfolio of flat lens technologies and is working closely with Capasso and members of his research group to catalyze commercialization of this technology through a startup company.

The research published was coauthored by Alexander Zhu, Wei Ting Chen,  Vyshakh Sanjeev, and Aun Zaidi. It was supported in part by the Air Force Office of Scientific Research. This work was performed in part at Harvard University’s Center for Nanoscale Systems (CNS), a member of the National Nanotechnology Coordinated Infrastructure (NNCI), which is supported by the National Science Foundation.