Does the temperature of a tennis ball affect how high it bounces? Which gender has the better sense of direction? Does rock candy form faster than rock crystals?

These were some of the queries Elizabeth Gallardo paused to consider as she perused the research posters on display at the Jackson/Mann K-8 School. Gallardo, who is pursuing a Ph.D. in applied physics at the Harvard John A. Paulson School of Engineering and Applied Sciences (SEAS), served as a judge during the Boston school’s annual seventh- and eighth-grade science fair.

While listening to seventh-graders Oumar Barbe and Rodrigo Barbosa, Gallardo was interested to learn how temperature affects a tennis ball’s bounce. Gas molecules have more energy when they are warm, which creates more pressure inside the tennis ball, causing it to bounce higher, Barbosa explained.

“This information could be useful for people if they are playing tennis in different types of weather,” Barbe said. “Or if they just want to cheat.” 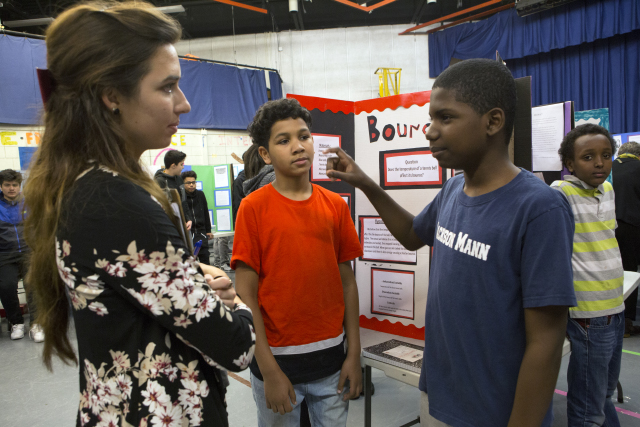 As she spoke with students who were showcasing projects in the school’s cafeteria, Gallardo evaluated each presentation based on the students’ scientific approach, lab notes, presentation, innovation, and understanding of the scientific concepts involved in the project.

She quizzed eighth-graders Eudrick Mbah and Shanaury Joseph on the methods they followed for their experiment, which involved blindfolding male and female test subjects and challenging them to walk a straight line. The students concluded that, in their experimental conditions, males had a better sense of direction. Keeping the volunteers from falling or injuring themselves was the biggest challenge they encountered during research, said Joseph.

“This project taught us that, before you start a scientific experiment, know the risks and carefully plan out everything you are going to do,” Mbah said.

Gallardo shared some scientific advice of her own with students. Pausing at a display about growing crystals using two different methods, borax and sugar, she commended seventh-graders Jessica Coj Calel and Yeilanise Noriega on how well they followed the scientific process.

Their simple experiment had some elements in common with the medical device research Gallardo tackles in the lab of Conor Walsh, John L. Loeb Associate Professor of Engineering and Applied Sciences, such as the importance of gathering extensive background research, careful formation of a testable hypothesis, and creativity in designing the experiment, she said.

“Sometimes you can’t just buy something to use in your experiment—you may have to be creative and invent something that solves the problem,” Gallardo told the students. 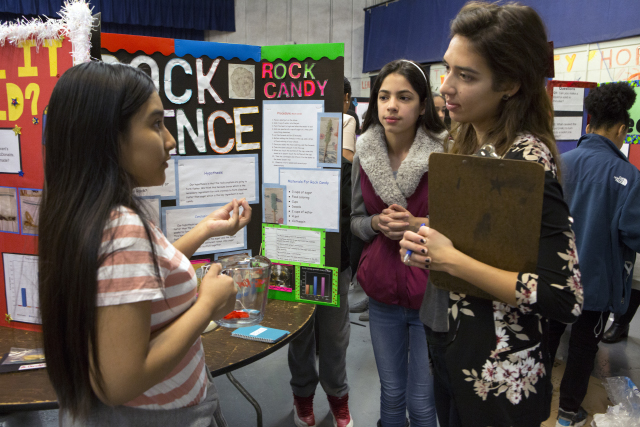 The independent projects, which the students select themselves and complete over the course of about a month, are designed to introduce the scientific process and show them how science and engineering are applicable to everyday life, said Raquel Monteiro, a seventh- and eighth-grade science teacher at Jackson/Mann.

This is the second year representatives from SEAS have served as Jackson-Mann Science Fair judges. Giving these kids an opportunity to share ideas and excitement with scientists and engineers might help inspire them to pursue STEM careers, said Kathryn Hollar, Director of Educational Programs at SEAS, who also served as a judge.

“In a way, I feel like I am acting as a talent scout for Harvard SEAS,” she said. “ It is important for these kids to talk to researchers and know that, if this is something they enjoy doing, there are many opportunities for them. They are moving in the right direction.” 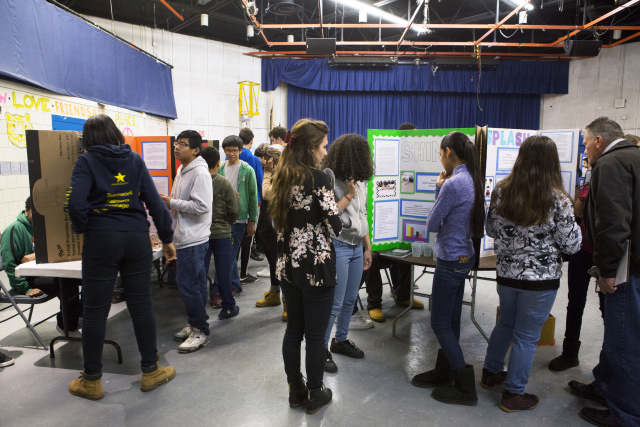