Student startup pushes life science innovations out of the lab

Academic institutions performed more than $71.8 billion of science and engineering research and development in 2016, according to the National Science Foundation, yet many innovations with commercial potential never make it out of the lab.

“We were both really passionate about the moment of translation, when an academic research project leaves the lab and begins the process of becoming an applied technology; something that actually helps people in the real world,” Horwitz said.

Often, researchers focused on grants and publications are not interested in commercialization, or an overburdened university technology transfer office is unable to give a new discovery its full attention, Horwitz explained. So he and his partners began searching technology transfer offices to find innovations that could help people, but weren’t being pursued for reasons unrelated to their ultimate potential. General Biotechnologies sources and develops these backlogged discoveries. 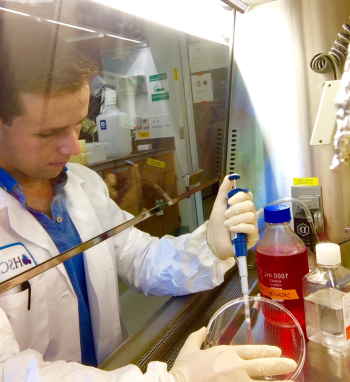 After examining dozens of portfolios—gathering feedback from experts on the technical viability, potential market size, and overall societal impact of each innovation—they found a life sciences breakthrough with huge potential. Research in the lab of Harvard Medical School Systems Biology Department Chair Marc Kirschner shows that a previously unaddressed biological target could enhance the effectiveness of chemotherapy. Shah and Horwitz used that research as a springboard for oncology startup Nivien Therapeutics. The company is developing the first drugs to enhance both chemo, the bedrock of oncology, and immunotherapies, a new class of treatment that can cure certain cancers, but has limited effectiveness in many others.

Most types of cancer cells have biological mechanisms that allow them to break chemo down into a less active form, or remove the drugs into the extracellular environment where they aren’t effective. Export also causes damage to nearby healthy cells, increasing the risk of side effects for patients, Horwitz explained.

“We are going after an upstream target that allows us to destroy the shields that cancer uses to resist current treatments,” he said. “What this does is down-regulate the components of the cancer cell that enable it to inactivate and remove chemo, while also triggering the release of signals from the cancer cells to the immune system, saying ‘I’m here, come get me, I’m cancer.’”

Working out of a new lab at the IndieBio Accelerator in San Francisco, Nivien recently hired two full-time scientists, raised more than $300,000 in initial funding, and began developing small molecules that could be used in medications. Horwitz took a leave of absence from Harvard in December to work at the startup full time.

The team’s mission is to develop drugs that replicate the therapeutic effects seen in the lab, which can then be taken into human trials. But as a new startup, especially one established by students, Nivien faces many challenges going forward.

“In biomedicine, there is a huge and generally healthy skepticism across all projects and all people, but especially difficult endeavors like Nivien being led by entirely new people,” he said. “It took us at least six months just to prove that we were capable and passionate and could actually make something happen here. It was really only after we gained that trust that we could do anything beyond planning.”

The John A. Paulson School of Engineering and Applied Sciences course Startup R&D (ES 95r) was instrumental in helping Horwitz develop the skills he needed to turn Nivien from an idea into an actual enterprise. The network and support of other entrepreneurs, and the opportunity to learn from those who have walked the entrepreneurship road before, helped him avoid many of the pitfalls that derail many startups.

It has been trial by fire for Horwitz and Shah, as they put those entrepreneurship lessons into practice by designing lean experiments, fundraising, negotiating partnerships, and hiring experienced scientists. But for Horwitz, who never thought he’d have the opportunity to work directly in an area he is passionate about so early in his career, Nivien’s potential to improve patient care is exciting, and the opportunities for General Biotechnologies seem almost endless.

“Every student at Harvard has big dreams,” he said. “I believe when you know your passion, you should just skip the stepping stones and do it now. Founding a startup is an enormous amount of responsibility and it weighs on you, but at the same time, it’s invigorating. This has been an extraordinary experience.”