After scaling Everest, this data scientist turned mountain climber charts his next adventure

For mountain climbers, standing on the summit of Mount Everest, literally at the very top of the world, is a crowning achievement. But alumnus Patrick Mauro, A.B./S.M. ’07, doesn’t consider reaching the peak of the world’s tallest mountain a personal zenith.

“I view it as preparing myself for some bigger adventure down the road. I want to continue to explore the unknown. Every expedition is just a preparation for the next one,” said Mauro, an electrical engineering and computer science concentrator at the Harvard John A. Paulson School of Engineering and Applied Sciences (SEAS). 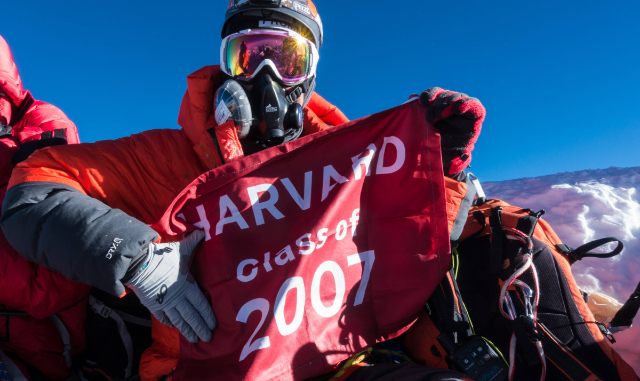 Mauro shows some Crimson pride on top of the world. (Photo by Chheweng Lendu Sherpa.)

The path this data scientist followed from his childhood home in the South Carolina Low Country to Everest’s craggy peak on May 25, 2017 involves almost as many twists and turns as the Himalayan ascent itself.

Mauro’s interest in engineering began during childhood. Drawing inspiration from his grandfather and father, both engineers, he spent hours designing and building bamboo forts in the woods near his home.

“I’ve always enjoyed big, complicated problems, and that’s the definition of a microchip,” he said. “Finagling with the layout, moving from theory to actually laying out wires and transistors on silicon, is both a highly technical skill and an art.” 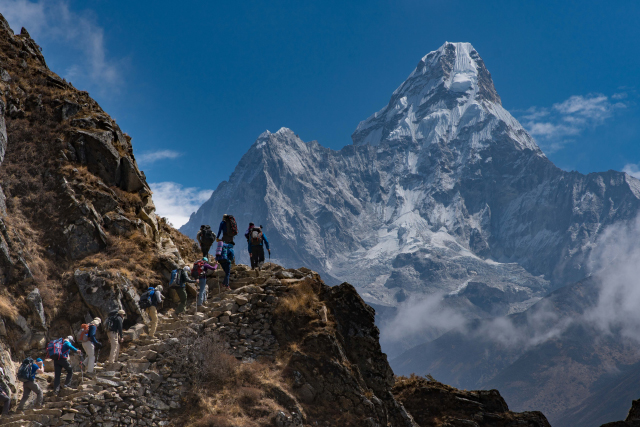 Mauro's expedition winds its way along a steep mountain trail in the Khumbu Valley with Ama Dablam looming in the background. (Photo by Patrick Mauro.)

Mauro enjoyed working with his hands on hardware, while also studying computer science concepts, such as programming and operating system design.

Early in his career, as an algorithmic trader at Hudson River Trading, he wrote computer programs to trade stocks in a completely automated fashion. Faced with an overwhelming amount of financial data, Mauro and his teammates made lightning-fast decisions to eke out more speed at the very edge of what their processors could handle.

“I found the research component and fundamental engineering problem pretty alluring. You are often stymied by rabbit holes of unknown depth that you have to keep exploring to truly understand what you are working on,” he said. “It was kind of mind boggling that we would write these programs that would start up at 7 a.m. every day and trade hundreds of millions of shares without any human interaction.”

Mauro, who was soon co-managing a team responsible for U.S. and European equities trading, began seeking an artistic outlet. Working with friends in the New York City music industry, he realized that many recording contracts have financial pitfalls for musicians. So he launched a record label and music investment venture, Bold Love Music Company, to offer a better solution.

“If you just hand a $50,000 check to a bunch of 22-year-olds and say, come back in six months with 10 songs, there can be a lot of unintentional financial mismanagement there,” he said. “By giving some money up front, and then rewarding them throughout the process for their continued efforts to promote their album, that would enable them to live as working musicians.” 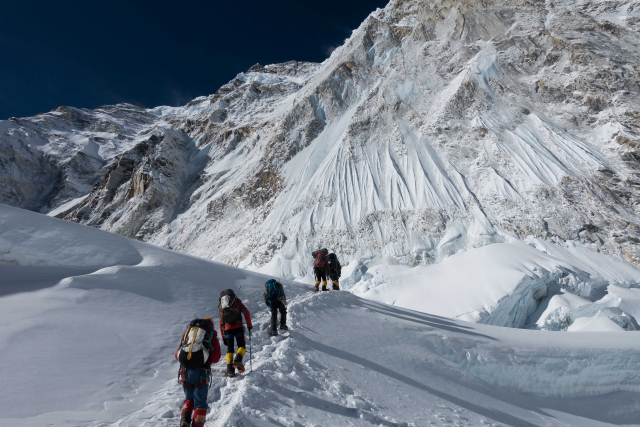 The team makes its way out of the Ice Fall and into the lower portion of the Western Cwm. (Photo by Patrick Mauro.)

Mauro drew on his experience as a SEAS teaching fellow, breaking down technical, financial engineering problems for musicians and managers.

Bit by the entrepreneurial bug, he left the record label and resigned from his day job on Wall Street to launch an event planning startup with a friend, but that venture went belly-up after only six months.

Dismayed and depressed, he stepped back from the breakneck pace of his career. He worked as an independent data scientist while focusing on a few of his bucket list items; he earned his pilot’s license and intensified his focus on mountain climbing.

Mauro’s passion for mountain climbing was sparked while he was a SEAS student. During a summer internship at Microsoft, the majestic silhouette of Mount Rainier inspired him to try mountaineering. Though he wasn’t able to summit the mountain that summer, the experience inspired Mauro and a few friends to plan regular excursions.

Throughout their adventures, such as ice climbing near Lake Placid, Mauro relied on his SEAS education nearly as much as his mountaineering training.

“Trying to climb a mountain is this really hard thing where there are going to be difficulties, some of which you can anticipate and others which you can’t completely plan for,” he said. “You are trying to come up with multiple contingency plans while managing people and equipment. That is an engineering problem.” 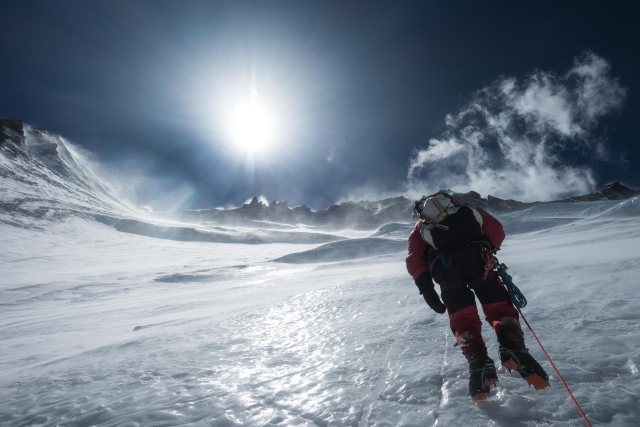 Successfully scaling Everest, for instance, is as much about good planning as it is about physical, mental, and emotional fortitude, he said.

Months before he set foot in Nepal, Mauro began a rigorous physical training routine. As part of his prep work, he flew to Tibet and climbed the sixth tallest mountain in the world, to get a sense for how his body would react to being in the “death zone” at 8,000 meters above sea level. Mauro then embarked on a climb in Argentina, to a volcano with little to offer in the way of prewritten guides, to test his skills as an expedition planner.

After that success, he felt prepared to take on Everest as a member of the International Mountain Guides expedition. The two-month trip began with a 10-day trek to base camp, then a six-week journey in some of the world’s most extreme conditions. Psychologically taxing and physically grueling, the experience pushed Mauro to his limits. He constantly felt a mixture of exhaustion and awe, but never fear.

“If you are a good climber, you attempt to eschew fear,” he said. “During planning, you evaluate all the risks at all times—ice falling, high altitude conditions, avalanches, cold weather. When you are actually on the mountain, you have all these contingency plans in place, so whatever happens, you just run through the checklist. Nothing really comes as a surprise.” 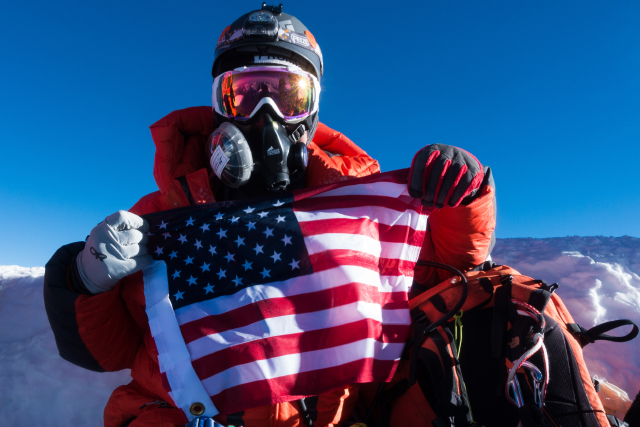 Mauro reached the summit at 5:47am on May 25; fewer than 800 Americans have summitted Mount Everest. (Photo by Chheweng Lendu Sherpa.)

Riding high from his success on Everest, he is now leveraging his skills and experience as an adventure expedition guide.

At the same time, he is looking to reach even greater heights; though he was recently declined for NASA’s astronaut selection process, he was identified as a highly qualified applicant.

“I don’t know if I am going to apply again, but it is very tempting,” he said.

Now looking forward to a future filled with adventure, Mauro can’t help but think about the experiences that guided him along this path, from his initial interest in tinkering to his data science career to the first time he set foot on a mountain.

One common thread that weaves it all together, he said, is passion.

“Keep going down a path where you are trying to excel at the things you are passionate about,” he said. “By continuing to say yes and doing things well, you can end up in a spot that you didn’t anticipate, but that is really cool.” 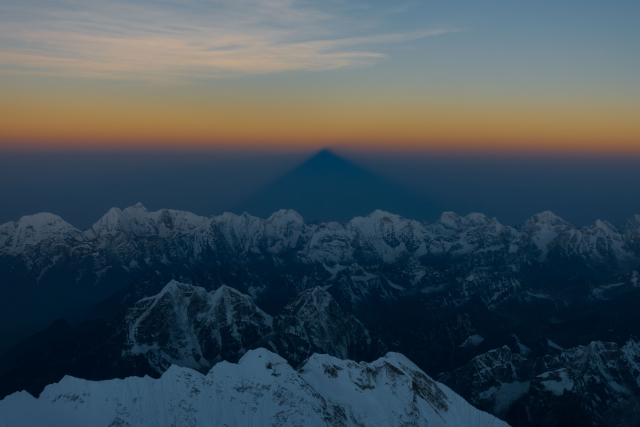