Deep beneath the surface of the ocean, glass sponges stand out like modernist sculptures in the still, dark water.

Matheus Fernandes, an applied math Ph.D. candidate at the Harvard John A. Paulson School of Engineering and Applied Sciences and Graduate School of Arts and Sciences, is using mathematics and computer science to unlock that secret. In the lab of Katia Bertoldi, the William and Ami Kuan Danoff Professor of Applied Mechanics, Fernandes examines how the sponges’ unique skeletal composition could be applied to make stronger structures.

The skeletons of glass sponges are composed of a square lattice-like structure—a grid formed by intersecting vertical and horizontal beams, each square  reinforced by two diagonal bracings. This double diagonal construction creates a stabilization mechanism for the lattice structure, Fernandes explained. He created prototypes, computer simulations, and optimization algorithms to study how the sponge design compares to other similar architectural lattice structures. 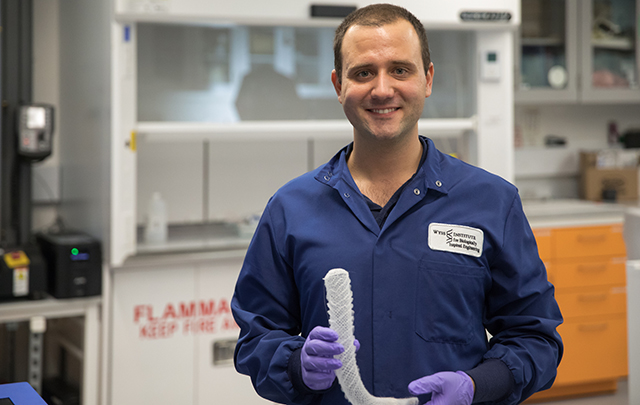 In the Bertoldi lab, Fernandes translates the lattice design principles from glass sponges to 3D-printed and laser-cut prototypes that are tested for mechanical strength. (Photo courtesy of Casey Cann at Harvard Bok Center)

His work showed that designing each square to include a double diagonal improved overall structural strength by at least 20 percent, without the need to add additional material.

“I never expected I would be working with a deep sea sponge,” he said. “This research is full of unexpected results. We have found a solution inspired by a natural phenomenon to a problem we didn’t even know we had. Can we look elsewhere in nature for inspiration to solve some of the world’s most challenging problems?”

An interest in solving problems is what inspired Fernandes to pursue engineering in the first place.

A native of Rio de Janeiro, Fernandes moved to Texas as a teenager, where he joined his high school’s FIRST Robotics team. The nearby NASA Johnson Space Center sponsored the team, so he and his teammates were mentored by NASA engineers and built robots in the same spaces where astronauts train. The guidance of passionate engineers inspired Fernandes as he worked to code the robots.

“I really enjoyed my experience because I could now translate what I had learned in the classroom to do something physically valuable,” he said. “This wasn’t just any arbitrary math in a computer. This was math that was physically translated to real-world applications. I could see it happening with my own eyes, and I felt real value in that.”

He joined a lab as an undergraduate—his first exposure to the world of academic research—where he created computer models analyzing airflow around a wind turbine to study the impact of nearby buildings. 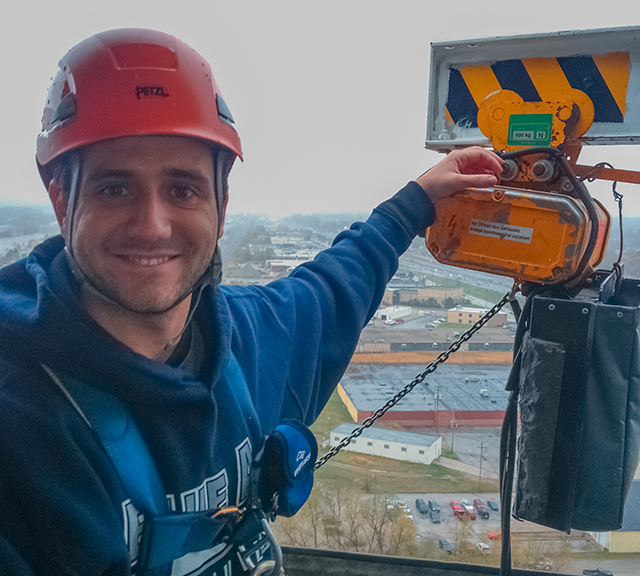 During his undergraduate education, Fernandes performed research on the efficiency of wind turbines and often climbed to the nacelle (top housing element of the turbine) to acquire data. (Photo courtesy of Matheus Fernandes)

“The challenging part of that project was matching numerical simulation to empirical data from nearby wind anemometer stations.” he said. “When I compared the data and the model, a lot of times, it didn’t fully match up. The task was figuring out what assumptions we had wrong and troubleshooting the numerics to come up with an optimum model.”

As he delved deeper into engineering, Fernandes also kept a minor in business management so he could understand the commercial side of innovation. Making a real impact through engineering often involves understanding the market demand, managing financial statements, as well as having a clear business plan, he said.

Studying business also emphasized to Fernandes the importance of using a cross-disciplinary approach to solve complex problems. He was inspired to pursue graduate studies at SEAS, where crossing disciplines between research areas is encouraged.

He completed a master’s degree in mechanical engineering and material science at Harvard, working with James Rice, the Mallinckrodt Professor of Engineering Sciences and Geophysics, studying the glacial mechanics of the Greenland ice sheet. They explored how supra-glacial lakes that disappear through huge cracks in the ice can cause an ice sheet to slide, ultimately contributing to sea level rise.

“That was fun because I got to analyze a completely different thing—glaciology, which I had never even thought of doing. There aren’t many glaciers in Rio,” he said. “What I do is really math. I can choose problems spanning various fields of study, but at the end of the day, the combination of math and computation is at the core of my work.” 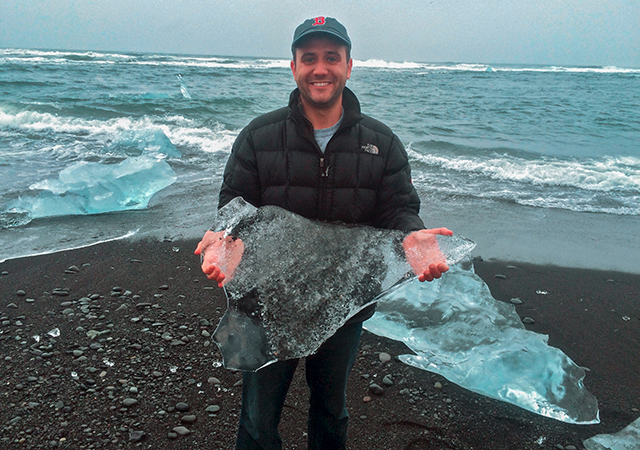 During his masters’ studies, Fernandes traveled to Iceland to study the mechanics of subglacial hydrology. (Photo courtesy of Matheus Fernandes)

So Fernandes changed gears again, and opted to pursue an applied math Ph.D with a secondary field in computational science and engineering at the Institute for Applied Computational Science.

His experience working on interdisciplinary projects has helped him in the Bertoldi lab, since studying glass sponges requires a great deal of collaboration with biologists.

In addition to understanding the biology at play, Fernandes enjoys matching theoretical models with physical experiments. For instance, he produced sponge-like prototype structures using a 3D printer and laser cutters to test how forces impact the structures. Building off the results of those physical experiments, Fernandes developed an optimization algorithm that enabled him to zero in on the ideal lattice configuration for maximizing strength.

“When I can translate something into a physical application, then I know whether I am right or wrong. I can fix it and I can learn from it. That is what I enjoy about this process,” he said. “None of this worked the first time. It was through iterations and failures that we were able to get to a point where it works and we understand what is going on.” 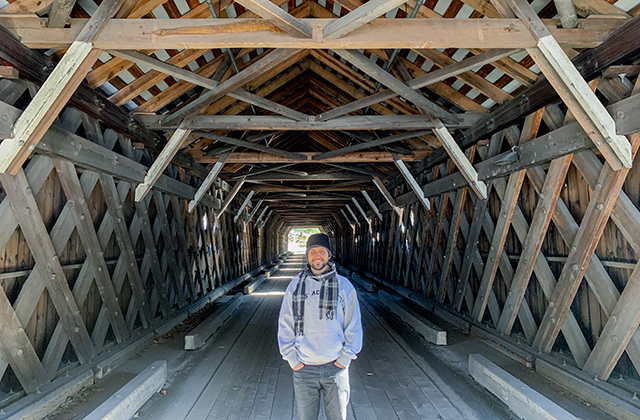 Fernandes believes his research will improve the mechanical performance of lattice-like bridges, which fundamental designs have not evolved since the 1800’s. (Photo courtesy of Matheus Fernandes)

For Fernandes, the opportunity to explore new worlds through science has been immensely rewarding, and he hopes to continue learning new things. Next, he’d like to study artificial intelligence and machine learning, and how those technologies could be incorporated into different disciplines.

He isn’t quite sure where his career will take him, but Fernandes is letting his curiosity lead the way.

“The world is full of interesting and exciting problems. In a sense, problem solving is what we do as humans,” he said.  “I feel good when I am able to have that ‘aha’ moment, where I can see the starting point in comparison to where I am now and the progress I have made.”