The centuries-old art of origami has found new life in the fields of physics, materials science, and engineering, where it is being used to create new metamaterials whose mechanical and electrical properties depend on the number, location, size and coordination of the origami folds. These properties can be controlled for regardless of the material or absolute scale.

One of the major questions in the field is how to control the mechanical properties, such as rigidity, of the metamaterial by simply varying the pattern of folds.

Now, researchers from the Harvard John A. Paulson School of Engineering and Applied Sciences (SEAS) have developed a way to control the rigidity and “floppiness” of origami structures by changing the density and pattern of extra folds. This could have implications for structures on a range of scales, from the nanoworld of graphene to the macroworld of architecture.

The research was published in the Proceedings of the National Academy of Sciences.

“Our study probes the percolation of rigidity — or how the floppiness changes with  the density  of redundant folds in a system — in origami ,” said L. Mahadevan, the Lola England de Valpine Professor of Applied Mathematics, of Organismic and Evolutionary Biology, and of Physics and senior author of the paper. “While our research is curiosity driven, it suggests a way to optimally control the rigidity in origami patterns for various applications.”

One such application is using these structures to store and retrieve information geometrically. 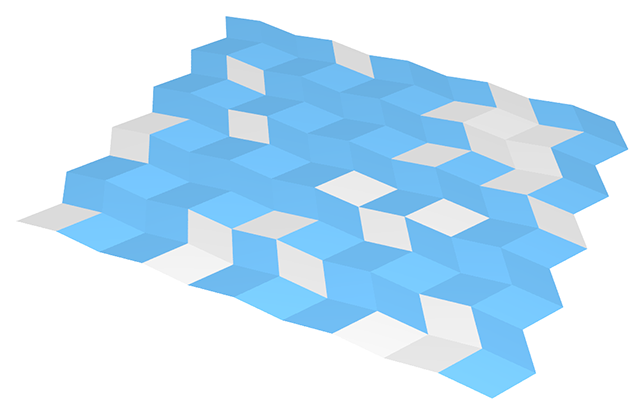 With a mixture of floppy (grey) and rigid (blue) quads, origami material can potentially store information. This image shows the unfolded state.

“With the same structure, we can organize the floppy and rigid quads in different spatial patterns so that the system can have different degrees of freedom,” said Siheng Chen, a PhD student at SEAS and first author of the paper.  “By folding the structure in a particular pattern, we can encode information into the material. By changing the spatial organization of these folds, we can store, and erase information.”

This lays the ground for origami memory, which could be used for mechanical computation in the future, said Chen.

“Being able to store information in a material using fold geometry could provide an alternative to storage via electromagnetic means, such as on a tape, or biochemical means such as in DNA,” said L. Mahadevan.

Next, the researchers aim to develop the geometric method to encrypt information, while also extending the framework to create mechanisms and structures that can show extreme changes in rigidity in the neighborhood of the percolation transition.

This research was supported in part by the National Science Foundation.