By Adam Zewe
May 22, 2019
FacebookTwitterEmailLinkedIn

What was the biggest challenge of moving from Mexico to the U.S. as a young child?

Growing up in Mexico, I had a very simple childhood, so moving to Los Angeles at the age of 9 was definitely a culture shock. When I moved to the States, I didn’t speak any English, and learning the language proved more difficult than I could have imagined. In school, I often felt ostracized from my peers because of my inability to speak English. I knew I had to break down that language barrier in order to communicate with my teachers and to be able to make new friends in a country far from home.

Why did you decide to concentrate in applied math?

As a freshman, I initially planned on studying archaeology. Since I was in sixth grade, I pictured myself as being the female Indiana Jones. I wanted to have amazing adventures and discover ruins throughout the world. During my freshman summer, I got the opportunity to participate in a dig in Israel, which was an amazing experience. We were digging in a Philistine cemetery in the city of Ashkelon. Our expedition also covered different archaeological sites and communities near us that were very interesting. I loved this experience, but I also realized I probably wasn’t ready to pursue research as a career. I then shifted my gears to the field of mathematics. I thought that studying math would give me more career prospects and also allow me to partake in research if graduate school was where I was headed. During my sophomore year, I took Applied Linear Algebra and Big Data (AM 120), which showed me the diverse paths I could take with math. You could use math anywhere, from a medical setting to an archaeological one, which was very exciting. I wanted the mathematical work I was going to do to have a direct and tangible impact on society. 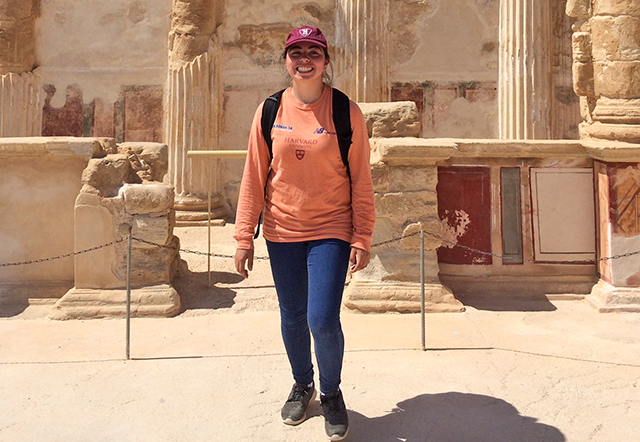 Originally planning to study archaeology, Valdez participated in an archaeological dig in Israel the summer after her freshman year. (Photo courtesy of Noemi Valdez)

What was the biggest challenge of studying applied math?

It’s challenging to be a woman in STEM. I often heard conversations centered around the lack of diversity in STEM and how things needed to change, but I didn’t fully grasp this until I experienced it. Throughout my time at Harvard, there have been classes where I have been one of the few girls in them and usually one of the few, if not the only, Latina as well. When I had to do a problem set or a class project, I would often look for another girl or someone who I knew, because I didn’t want to feel judged if I didn’t know the answer immediately. I didn’t want my lack of understanding to be associated with my gender or with my ethnicity.

Has that experience inspired you?

Experiencing the lack of diversity really inspired me to make a change. During my sophomore year, a few of us got together to establish a SHPE chapter, which is the Society of Hispanic Professional Engineers. We wanted a space for people who come from minority backgrounds or who are Hispanic/Latinx to be able to share with others how their experiences have been as students at SEAS. More than that, we realized that a lot of us faced the same struggles and that we dealt with ‘imposter syndrome,’ and the feeling that we were not cut out to do STEM.

SHPE provides a safe space for all of us who have felt this way. Moreover, it provides pre-professional advising through national and regional conferences where we get to network with different companies and build relationships with students from all over the country. Having this chapter has empowered so many of our students on campus because we know that we are not alone in our fight for diversity in STEM and we’ve come to accept that we are making a change, even if it’s as small as graduating with a STEM degree. 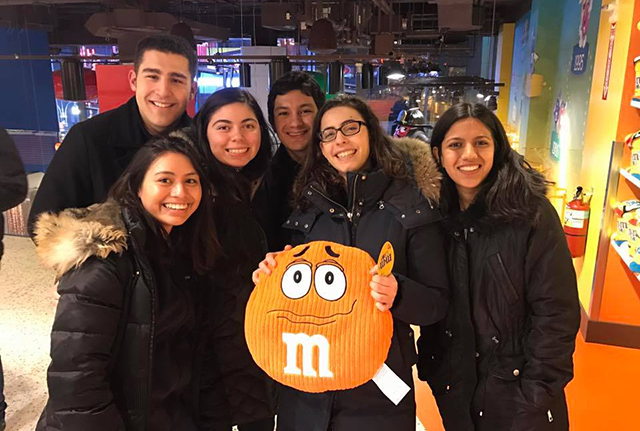 Valdez (third from left) with several other members of the Harvard Society of Hispanic Professional Engineers chapter at a club event.

Tell us about some of the research you’ve been doing at the Radcliffe Institute for Advanced Study.

Currently, I’m working with Radcliffe Fellow Jose Javier Zamora, who’s writing a memoir on immigration. This project really spoke to me because, as an immigrant, I feel connected to a lot of the issues and struggles that immigrants go through when they move to the States. His book is centered around 1999, which is when he came to the States. My research includes reading and analyzing different newspapers and articles to study what was happening during the time period he was crossing the border. Through this, I’ve been able to more deeply grapple with the influence of political agendas on immigration.

What have you gotten out of your work with Zamora?

I’ve really enjoyed getting to work with Javier. This project has helped me understand more about immigration, immigration laws, and the politics intertwined with it. On a personal note, I think that as immigrants, we often don’t see how far we’ve come. A lot of times, you come to the States, you learn English, you get a career, and you think, ‘oh, that’s it.’ You don’t realize all the resilience that you possessed in order to overcome all those obstacles. Getting to work with Javier has really made me interested in the immigration stories of my family and friends because everyone’s stories and struggles are unique to that individual. But at the end of the day, you know everybody wants the same thing—we all have the hope of having a better life here in the States. 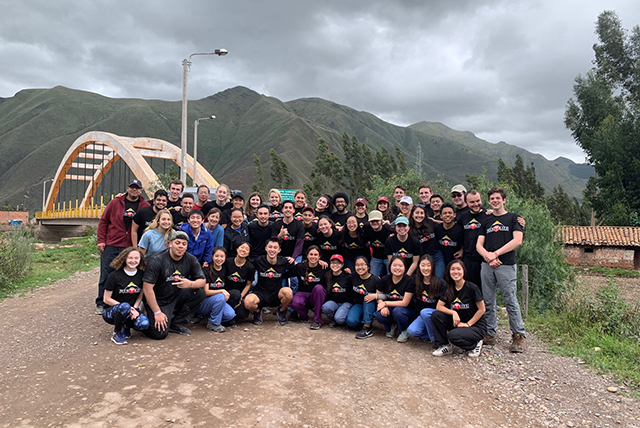 The MEDLIFE team, which provided health care and accessible medicine to underprivileged communities in Peru. (Photo courtesy of Noemi Valdez)

What has it been like to work with MEDLIFE?

MEDLIFE is a program that serves underprivileged communities in Latin America and other countries. We focus on providing health care and accessible medicine to these underprivileged communities. Throughout the semester, we teach students about the culture, the political climate of the area we’re going to, what to expect, and how to perform simple medical tests, like taking blood pressure and administering anti-parasitic medication. Once we get on site, we’re able to shadow and assist doctors. This past winter break, we directed a program in a remote area of Cusco, Peru, and it was definitely one of the best trips I have been on.

How has your work with MEDLIFE been rewarding?

Coming from an underprivileged background, there were times where people from the States would come and bring food or medicine to the communities where I grew up in Mexico. Seeing that motivated me to want to do that for others one day, and I was lucky enough to be given the opportunity to do that at Harvard. Being able to give back has been one of my most rewarding experiences here, because I know that even now, my family back home in Mexico still lacks some of these basic needs. 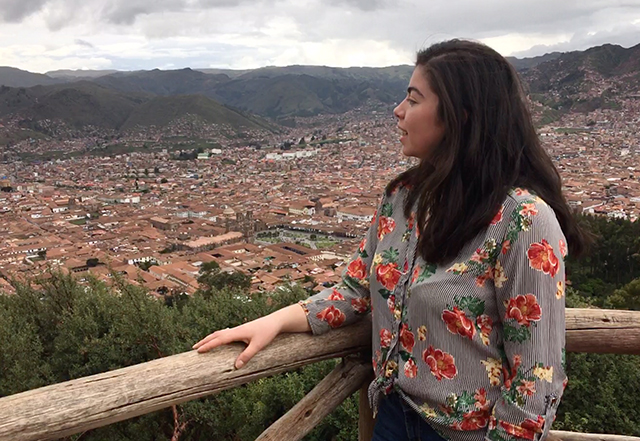 While volunteering with MEDLIFE, Valdez had the opportunity to travel to the city of Cusco in Peru. (Photo courtesy of Noemi Valdez)

What are your plans for after graduation?

After graduation, I will be joining Goldman Sachs in their operations division. After a few years, I’d like to go back to graduate school with the ultimate goal of teaching mathematics at a university. For me, being able to teach at the university level is so important because I know that during my time at Harvard, I wish I had had faculty who understood my background and the obstacles I have faced as a first-gen student. I want to make sure that future Hispanic kids have a support system when they come to college and that they can see themselves represented in whatever field they choose to study.