Nature has a way of finding optimal solutions to complex problems. For example, despite the billions of ways for a single protein to fold, proteins always fold in a way that minimizes potential energy.  Slime mold, a brainless organism, always finds the most efficient route to a food source, even when presented with an obstacle. A jump rope, when held on both ends, always ends up in the same shape, a curve known as catenary.

This kind of optimization is explained by what’s known as a variational principle: any other deformation – or variation – of the shape found by the protein, mold or jump rope would require more energy.

Now, researchers from the Harvard John A. Paulson School of Engineering and Applied Sciences (SEAS), have found that some lasers use the same principle. The research is described in Physical Review Letters.

Frequency combs are widely-used, high-precision tools for measuring and detecting different frequencies — a.k.a. colors — of light. Unlike conventional lasers, which emit a single frequency, these lasers emit multiple frequencies in lockstep, evenly spaced to resemble the teeth of a comb.

When a laser produces a frequency comb, it emits waves of light that repeat themselves periodically in time. Depending on the parameters of the comb, these waves can either have constant intensity while varying in color, or look like short pulses of light that build and drop in intensity.

Researchers know how combs produce pulses, but how so-called frequency-modulated lasers can maintain a constant intensity in the face of changing frequencies has been a long-lasting puzzle.

The team of researchers, led by Federico Capasso, the Robert L. Wallace Professor of Applied Physics and Vinton Hayes Senior Research Fellow in Electrical Engineering, were able to reconstruct on a time scale of a trillionth of a second the waveform emitted by light sources known as quantum cascade lasers, widely used in spectroscopy and sensing.  They found that the lasers choose to emit light waves in a way that not only suppresses the intensity fluctuations —leading to a constant intensity in time — but also maximizes the power output. 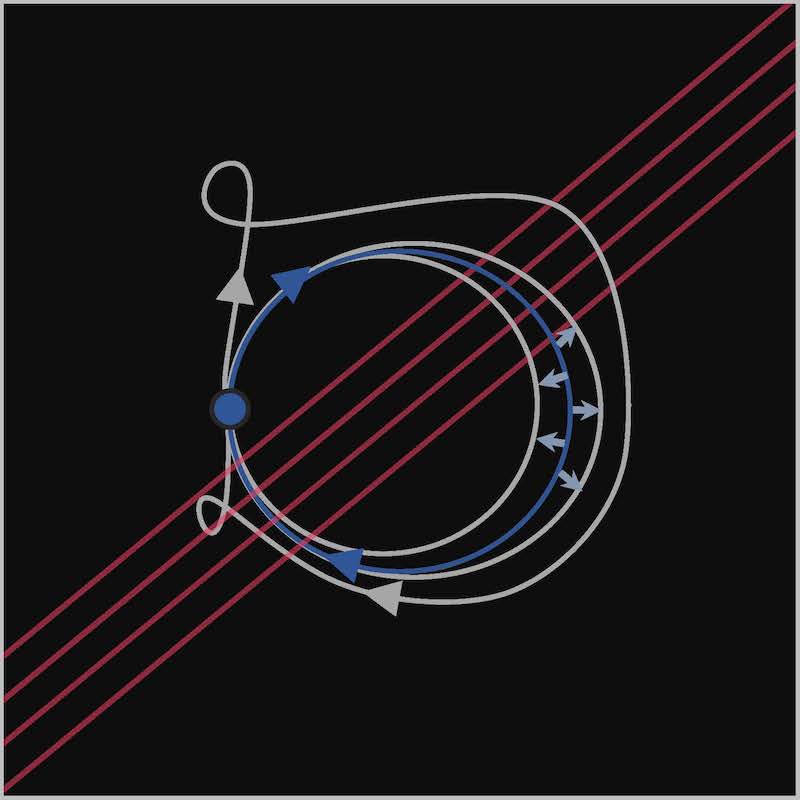 The modes of an optical frequency comb (red lines) are locked together by a variational principle. This principle defines a specific path (blue line) in the vast parameter space of the laser, which is preferred to any other path (grey lines) obtained by small variations of this trajectory. In obeying this variational principle, the laser guarantees to maximize its output power. (Image courtesy of the Capasso Lab/Harvard SEAS)

“We discovered that a frequency-modulated laser can adjust parameters by itself, similar to a DJ turning knobs on a music synthesizer, to minimize fluctuations of the emitted intensity wave,” said Marco Piccardo, a postdoctoral fellow at SEAS and first author of the paper. “Turning all these knobs in the right way is not an easy task. In producing a nearly-flat intensity waveform, the frequency-modulated laser has solved a complex optimization problem, performing just like an analog computer.”

“This discovery unravels the physics of a promising frequency comb technology,” said Capasso. “Benefitting by a minimal intensity modulation at the laser output, these devices could rival conventional ultra-short pulse mode-locked lasers in spectroscopy applications.”

The research was co-authored by Paul Chevalier, Benedikt Schwarz and Dmitry Kazakov of SEAS and Yongrui Wang and Alexey Belyanin of Texas A&M University. It was supported by the National Science Foundation.