Oceans comprise 80 percent of our biosphere, making them the largest habitat on earth, but how much do we really know about them? These bodies of water cover huge expanses and are thousands of meters deep, yet we often take them for granted. Most people only understand the ocean to be what they can see, but much more lies far beneath the surface. Relatively little is known about the bottom of the oceans because of the immense pressure and varying temperatures that make it extremely difficult to collect data directly from the source.

“Humans walked on the moon in 1969, but the first deep, big hydrothermal vent was only discovered in 1977, almost 10 years later,” said Andrea Rodriguez-Marin Freudmann, S.B. ’20, a mechanical engineering concentrator at the Harvard A. Paulson School of Engineering and Applied Sciences. “People just assume that the ocean is this big expansive nothing, but there’s a whole bunch of life, and the weird thing is that life is completely different from our own because they are living in an environment where there is no light and basically no oxygen, and where it is cold—around 4 degrees Celsius—or so hot that if there wasn’t so much pressure, the water would be steam.”

Hydrothermal vents are one of the most extreme environments on earth, as they are subject to an enormous amount of pressure, while temperatures that reach higher than 350 degrees Celsius interact with the freezing, aerobic seawater. Yet, this intermingling enables a tremendous amount of microbial productivity that results in communities with biomass comparable to that of the rainforests, according the Harvard lab of Peter Girguis, Professor of Organismic and Evolutionary Biology, whose primary focus is the study of the physiology and biochemistry of deep sea microorganisms.

In order to collect data from these extreme environments, the Girguis lab has engineered several machines that can withstand the harsh conditions for long periods of time. Working alongside Jennifer Delaney, the lab manager, and Daniel Hoer, a postdoctoral fellow, Freudmann has been working to further improve the accuracy of the mass spectrometer developed by the lab, an instrument used to detect a broad range of compounds in situ.

“Generally, the way our mass spectrometer works is there is an inlet that lets water into the instrument, the water diffuses across a membrane due to a vacuum on the other side and becomes ionized. It then passes through an electric field which allows us to detect different charged ions and determine what came through the membrane,” explained Freudmann. “The problem is that right now we get so much stuff across the membrane, including water vapor, that it is really hard to pull a really good vacuum, which means we get a lot of noise, or we can see some signals of various compounds, but we can’t see them very well or very quickly. What I am trying to do right now is to decrease the total amount of stuff that’s coming across the membrane and then see if by decreasing the total pressure, in other words, increasing the vacuum, we can get a better signal overall.” 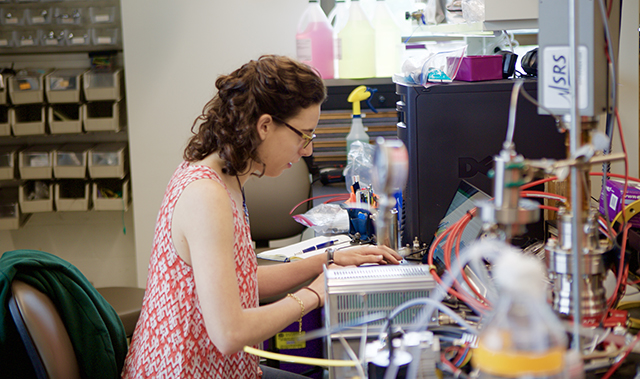 Having worked on this project since the beginning of her sophomore spring, Freudmann has had the ability to test different approaches to the same problem, allowing her to learn the fundamentals of problem-solving.

“It’s a challenge to know what to do when you get stuck, so thinking around that roadblock is something I find difficult,” said Freudmann. “But, that is why someone like Dan is here to give me different approaches and, over time, I’ve started to be able to come up with those approaches myself. The reality of this research is that we are just trying to improve what this instrument is already doing, so unfortunately that is going to be 90 percent misses.”

Heading into her final year at Harvard, Freudmann has had the opportunity to explore the field of microbiology with her mechanical engineering background, exposing her to the interdisciplinary nature of research. Although having little background knowledge in this particular field, Freudmann has found it incredibly interesting and is considering pursuing it further in her thesis project.