Putting humanity back into computer science

Computer scientists are attempting to make autonomous systems of artificial intelligence that push the envelope of what technology can achieve. Often, the goal of these advancements is to make tools that are able to produce the same things a human could in less time, with less cost, and with less human error. However, for creatives such as writers, artists, and filmmakers, these tools fall short of making an impactful product, as they strip their artform of its humanity.

This issue is what Cole Batemen, a joint computer science and film concentrator at the Harvard A. Paulson School of Engineering and Applied Sciences, is investigating in a project he has dubbed ‘Creating for Creatives.’

“It’s investigating creative augmentation, which is a new field in CS research that seeks to develop tools to help creatives like filmmakers, animators, and writers within their own pursuits and projects,” he explained. “The problem that I’ve found in the many tools I have been exploring is that they focus more on the limitations of technology, what artificial intelligence can do rather than what artificial intelligence can do for the creative.”

Through a series of interviews with professionals and novices in different creative fields, Bateman hopes to write a series of principles to guide computer scientists when they are making tools for creatives.

“The principles should work as guidelines for people designing in creative augmentation,” Bateman said. “Say you want to make a tool for an animator, but you don’t have the 20 to 30 years of expertise in the field. What is it that you should be thinking about when you’re making these tools?”

Combining the fields of computer science and filmmaking, particularly animation, Bateman is approaching this topic from a unique perspective.

“I’ve always been the biggest fan of 2D animation—Disney’s golden age or just modern day cartoons. Originally, I had wanted to do a project on how to minimize the amount of time necessary to make those kinds of films, but what I realized was I was approaching it from the same standpoint I’m researching now,” he explained. “Through a lot of different iterations of a lot of different ideas, my professor, [Elena Glassman, Assistant Professor of Computer Science], came to the realization that there’s so many tools like this that are meant to help people, but at the same time people aren’t using them, so then I got the question: why is that?” 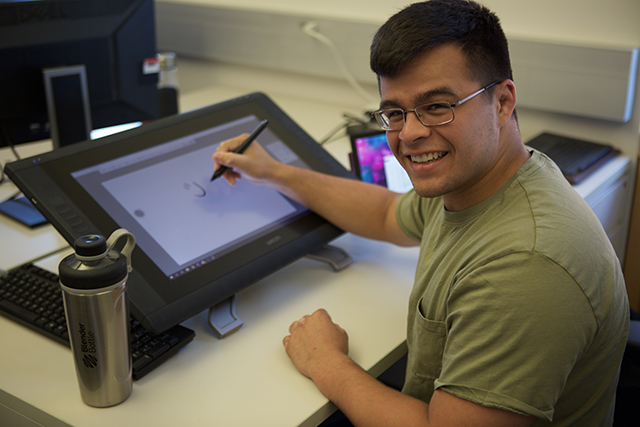 The breakthrough moment in his research began in the very beginning of the process when he came across a video about four students creating an AI-centered zombie emulator. The emulator was supposed to move a 3D model of a character in space without inputting any instructions, Bateman explained. The students presented their project to Hayao Miyazaki, co-founder of the acclaimed Japanese animation firm Studio Ghibli. To the students’ dismay, Miyazaki said he hated the product they had created because it took out the human aspect of animation.

“How he phrased it was ‘humanity is losing faith in itself’ and I just never thought about it that way,” said Bateman. “I always thought artificial intelligence augmentation would be this amazing thing in all forms of the animation industry. It really struck home that when you’re making something for a person you have to make sure that you make it for humans.”

Bateman’s research centers around focusing computer science on human-computer interaction, rather than creating tools merely for the purpose of technological advancement. In order to create a clear set of principles, Bateman is attempting to figure out specifically what features animators want from creative augmentation, which can be highly varied and extremely abstract, depending on who is being asked.

“Something I’ve realized with CS research is that so much of what you are doing is just thinking about it for a while,” said Bateman. “It’s easy in CS to feel your progress because you’re typing out code, but with something like research there’s no marker for you making progress.”

Despite not being used to this form of research, Bateman has been able to move forward with his project and has begun gathering information from his various interviews. Beyond presenting a paper to his professor, Bateman’s goal is to submit his work to the ACM CHI Conference on Human Factors in Computing System, a premier international conference in human-computer interaction.