In February, computer science grad student Elizabeth Bondi organized an event at the Association for the Advancement of Artificial Intelligence conference to introduce high school students to artificial intelligence.

The half-day event paired students with mentors to brainstorm ways AI could solve societal problems. At the end of the day, student feedback revealed two things: participating in the event had increased their interest in AI, and they wanted more time to explore the technology, Bondi said.

So she launched a startup, Try AI, to offer research and mentorship experiences, including two-week, funded AI micro-internships geared toward early undergraduate students, particularly those from traditionally underrepresented backgrounds.

“The idea here is to work with first- or second-year students who are just starting out in their college experiences and may not have had research experiences yet,” said Bondi, who studies the use of AI for wildlife conservation and public health in the lab of Milind Tambe, Gordon McKay Professor of Computer Science at the Harvard John A. Paulson School of Engineering and Applied Sciences. “It is intended to be a stepping stone, to introduce these students to AI research early so they still have time in undergrad to pursue further research opportunities later on if they are interested.”

During the micro-internships, which were offered during December, undergraduates were paired with Harvard grad student and postdoc mentors with whom they collaborated to conduct a research project into an AI-related topic.

Ten students and 10 mentors participated in the first cohort, and projects ranged from a study of how AI can protect people’s privacy to the role of AI in health and diagnosis.

Adar Tulloch, a sophomore computer science major at Oberlin College in Ohio, researched how AI could enable an assistive device for the blind to detect obstacles in the user’s path as they walked along a city sidewalk. His mother works as a teacher for blind and visually impaired students, so his passion revolves around building accessible and assistive technologies, he said.

Tulloch explored the complexities of designing an algorithm that could detect objects and identify them as impediments, and then determined how the AI model could measure the distance between the user and those impediments.

“Piecing everything together into one working pipeline was the biggest challenge,” he said. “The greatest lesson I learned is that anything is possible. In research, the result you get might not be what you expected, but along the way you notice things and have new revelations that you hadn’t previously experienced. Learning the different ways to understand and tackle a problem like this was very important for me, and I’m glad I got that experience.”

Zad Chin, a first-year Harvard student, dug into health data for her project. As a child growing up in Malaysia, she witnessed how inefficiencies in the health care system have an outsized negative impact on under-resourced patients, she said. So she explored how AI could lead to better outcomes.

Chin and her mentor utilized AI to predict a patient’s COVID-19 status using health data recorded at a testing location. By building a model that analyzed symptoms like fever, cough, and difficulty breathing, she trained a machine learning algorithm that could determine whether someone is positive or negative for the disease.

“This program strengthened my determination to pursue a career in AI and health care,” she said. “This project allowed me to see the power of AI, and its ability to actually help society become better and provide equal opportunity access to health care for everybody. I think this program really changed me a lot.”

For Bondi, watching students present at the program’s culmination emphasized that Try AI can have a real impact on the field’s future. She appreciated how mentors stepped up to offer guidance and support.

"I was incredibly impressed by what the students accomplished in just two weeks,” she said. “Their unique, insightful ideas and enthusiasm led to fascinating presentations and research directions. I hope the students gained new skills and understanding of AI and research, but above all, I hope they gained confidence in their ability to try and excel in new career paths."

Moving forward, she’s planning to organize more events, including an upcoming speaker series in February. The support and guidance from advisors in the Harvard Innovations Labs has been critical as she looks to broaden the reach of Try AI in the future.

“Try AI is a clear highlight of the semester for me,” said Alexis Stokes, Assistant Dean for Diversity, Inclusion, and Belonging at SEAS. “The students accomplished a lot in just two weeks and are the next generation of AI scholars to watch. There is a clear need for more programs like Try AI that target early career undergraduates and remove barriers to research opportunities.” 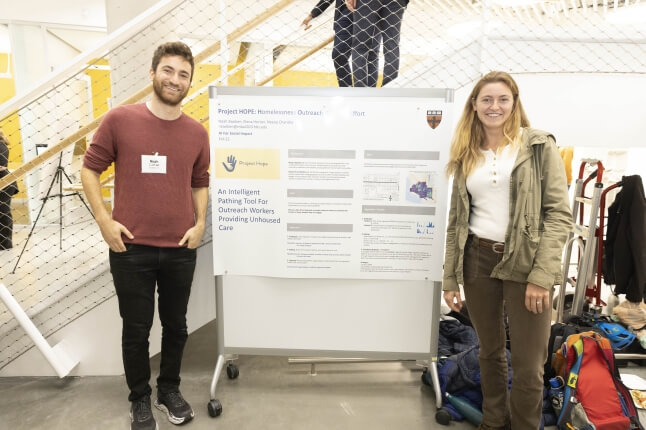