This spring, the Harvard John A. Paulson School of Engineering and Applied Sciences (SEAS) welcomed Petros Koumoutsakos to the ranks of its faculty as the Gordon McKay Professor of Computing in Science and Engineering.

Koumoutsakos joins Harvard from ETH Zurich, where he served as the Chair for Computational Science. His research focuses on the fundamentals and applications of computing and AI to understand, predict and optimize fluid flows in engineering, nanotechnology, and medicine. In recent years, his work has investigated a range of topics including blood flows, virus traffic, nanoscale fluid flows and schooling fish behavior.

Koumoutsakos’ work weaves through disciplinary interfaces. At SEAS, his research will include a project that aims to discover the effective dynamics of complex systems by fusing numerical analysis, Bayesian inference and deep reinforcement learning. Other projects connect the physics of schooling fish with neuroscience, and microfluidics and drug development. Koumoutsakos also plans to collaborate with colleagues in quantum computing and engineering.

“SEAS has an amazing number of inspiring colleagues, a very vibrant research and teaching community and last but not least exceptional staff and students,” said Koumoutsakos.

He will serve as the Faculty Director at the Institute for Applied Computational Science. Through its leading master’s programs as well as public events and community programs, IACS provides an intellectual home for learning, research, and external engagement to advance the fields of data science and computation.

Koumoutsakos assumes this role taking over the position from Efthimios Kaxiras, the John Hasbrouck Van Vleck Professor of Pure and Applied Physics and of Applied Mathematics. Kaxiras was the founding Faculty Director at IACS and served in the position again after Hanspeter Pfister, the An Wang Professor of Computer Science at SEAS, led the institute from 2013 to 2017.

“Tim Kaxiras served as the visionary founding faculty director of IACS and blazed a trail for applied computation across multiple domains,” said SEAS Dean Francis J. Doyle III. “I am grateful for his leadership, both in launching this important initiative and returning for a second tour to lead and further advance its mission during the past three years.”

Koumoutsakos shares a connection with each of his predecessors at IACS. Both Koumoutsakos and Kaxiras attended the National Technical University of Athens and Koumoutsakos taught at ETH Zurich for many years, where Pfister completed his M.Sc. in Electrical Engineering.

“Efthimios is Greek, Hanspeter is Swiss and I am both Greek and Swiss,” said Koumoutsakos, with a laugh. “Under the leadership of my predecessors, IACS has developed an exceptional teaching program in Computing and Data science. I hope that it can also serve as a hub for research exchanges in these areas. Computing and Data Science are constantly evolving. I think it is important that students learn about these new developments and that IACS serves in this capacity.”

Koumoutsakos received his PhD at the California Institute of Technology, where he studied Aeronautics and Applied Mathematics. Koumoutsakos is a Fellow of the American Society of Mechanical Engineers (ASME), the American Physical Society (APS) and the Society of Industrial and Applied Mathematics (SIAM). He is recipient of the Advanced Investigator Award by the European Research Council  and  the ACM Gordon Bell prize in Supercomputing. He is an International Member to the U.S. National Academy of Engineering (NAE). 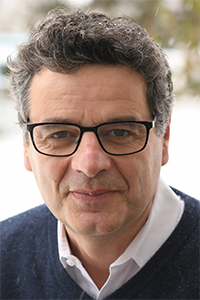