How the lily blooms

Harvard mathematicians reveal that ruffling at the edge of each petal drives the delicate flower to open, contradicting common theories of blooming 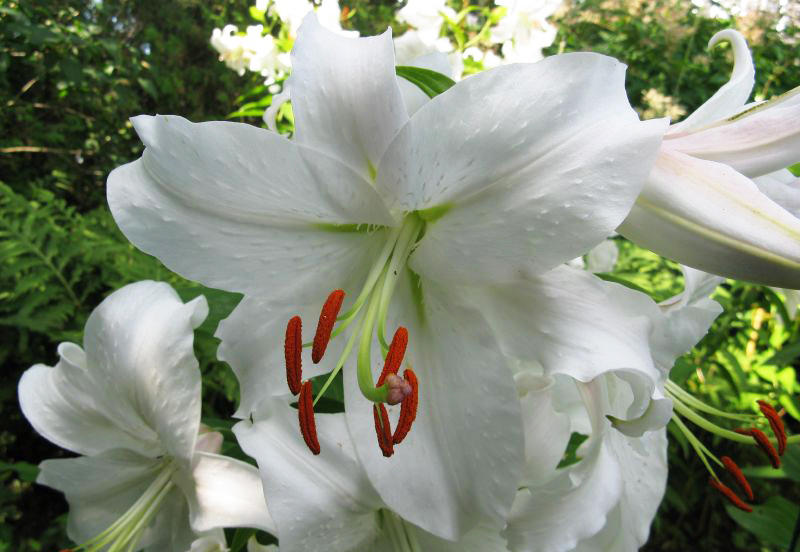 Cambridge, Mass. - March 21, 2011 - The "lily white" has inspired centuries' worth of rich poetry and art, but when it comes to the science of how and why those delicately curved petals burst from the bud, surprisingly little is known.

Now, however, mathematics has revealed that differential growth and ruffling at the edges of each petal—not in the midrib, as commonly suggested—provide the driving force behind the lily's bloom.

The research, conducted at Harvard's School of Engineering and Applied Sciences (SEAS), contradicts earlier theories regarding growth within the flower bud. The petals, in fact, behave like leaves.

Published online this week in the journal Proceedings of the National Academy of Sciences, the findings characterize the blooming process using mathematical theory, observation, and experiment.

"That differences in planar growth strains can lead to shape changes has been known for some time," says principal investigator L. Mahadevan, the Lola England de Valpine Professor of Applied Mathematics at SEAS. "But showing that it is at work and dominant in lily blooming is new, as our measurements and simple theory show."

"What is most surprising is that a subject that is so rich in metaphor—the blooming of a flower—had been studied so little from a quantitative perspective."

Mahadevan collaborated with Haiyi Liang, formerly a postdoctoral fellow at SEAS and now a professor at the University of Science and Technology of China in Hefei.

Together, they studied the asiatic lily Lilium casablanca, the bud of which comprises three inner petals wrapped in three outer sepals.

A stiff midrib runs along the center of each petal and sepal, protecting the structure of the developing flower bud. The edges of the sepals also rest in grooves along the midribs of the petals, forming a locking mechanism that holds the bud closed until the growth inside reaches a critical point.

It was previously suggested that growth in the midribs might provide enough internal stress for the petals to burst out of their casing. Another plausible theory held that if the internal (adaxial) face of each petal and sepal grew faster than the external (abaxial) face, the flower would eventually be forced to bend outward. In some plants, these mechanisms do drive the blooming process.

Liang and Mahadevan's new research shows that in the lily, however, midrib growth and differential adaxial/abaxial growth play only minor roles. Rapid growth and wrinkling at the periphery of the petals actually create the stress within the bud that forces it to burst open.

The researchers used observation and experimentation to measure growth in various parts of the petals and to determine which types of growth are necessary for blooming. They then characterized the process mathematically in order to quantify, synthesize, and generalize their observations beyond the specific instance (see videos at right).

The findings contradict common assumptions about the lily, but they do seem to vindicate one unlikely theorist: German literary master Johann Wolfgang von Goethe.

In a 1790 essay, "Metamorphosis of Plants," Goethe proposed that petals and leaves could be homologous, meaning that they are both derived from one ancestral form.

"In a sense," says Mahadevan, "we have quantified one aspect of the similarity by showing that in addition to being laminae (like blades), the morphologies of petals and leaves are often determined by similar principles."

"In particular, leaves have rippled edges due to gradients in growth in the plane that lead to the edge growing more than the middle, a phenomenon that Liang and I demonstrated in 2009," he adds. "Here, we build on and generalize these results to show that lilies bloom using a mechanism that is similar to leaf growth, except that the petals are curved objects."

His previous research, often inspired by beauty in nature, has investigated questions such as how snakes slither and how the Venus fly trap snaps its jaws.

The question of how the lily blooms, Mahadevan says, "is just one more small instance of being inspired by and curious about the natural world around us, a subject that fascinates us all, child and adult alike."

The research also has immediate practical applications in materials science involving thin films and elastic sheets, and it may affect the development of devices such as sensors and actuators that mimic the mechanism of blooming.

The work was partially funded by the National Science Foundation (NSF)-funded Materials and Research Science and Engineering Center at Harvard and the Defense Advanced Research Projects Agency (DARPA).

Watch the model of a curving petal on YouTube.

Mahadevan and Liang created a time-lapse video of the blooming lily over the course of 4.5 days, taking one photo every minute.

Over the first 4 days, the bud grows 10 percent longer and 20 percent wider. Hidden from view, though, rapid growth at the edges of the petals is creating stress that will soon force the bud to burst open. After 4 days, the hidden petals already have ruffled edges. When the growth strain reaches a critical point, the flower blooms.

This abridged version shows just the last part of the process: the opening of the bud.

Mahadevan and Liang created an animated model to show how peripheral growth causes the developing petals to ruffle at the edges and curve outward, leading to blooming. 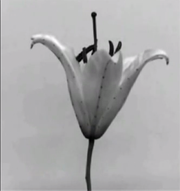 Prof. Mahadevan won a prestigious MacArthur "genius" Fellowship in 2009, at which point he discussed his methods and sources of inspiration with the MacArthur Foundation.

"Having children around... is always good fun, because they ask you questions that, most often, you can't answer," he said. 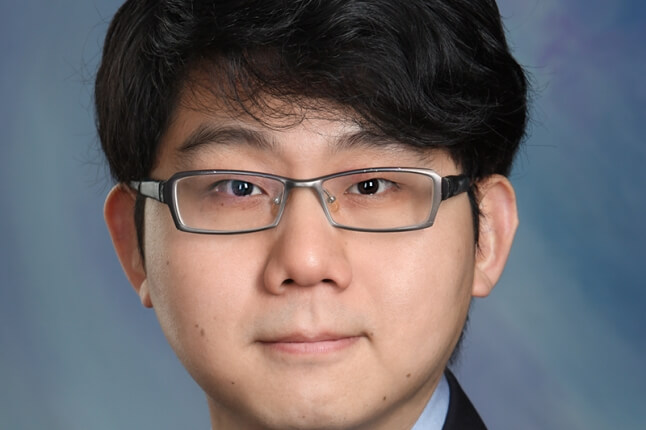