Artificial muscles do the twist

In 3D, healthy hearts do their own version of the twist. Rather than a simple pumping action, they circulate blood as if they were wringing a towel. The bottom of the heart twists as it contracts in a counterclockwise direction while the top twists clockwise. Scientists call this the left ventricular twist, and it can be used as an indicator of heart health. 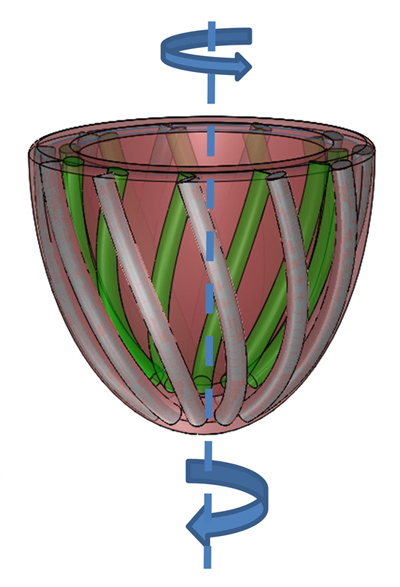 The heart is not alone. The human body is replete with examples of soft muscular systems that bend, twist, extend, and flex in complex ways. Engineers have long sought to design robotic systems with the requisite actuation systems that can perform similar tasks, but these have fallen short.

Now a team of researchers at the Harvard School of Engineering and Applied Sciences (SEAS) and the Wyss Institute for Biologically Inspired Engineering at Harvard University has developed a low-cost, programmable, soft actuated material that gives renewed hope to the mission. The researchers demonstrated the material’s potential by using it to replicate the biological motion of the heart, and also developed a matching 3D computer model of it, as reported in Advanced Materials in an article called "A Bioinspired Soft Actuated Material."

“Most models of the heart used today do not mimic its 3D motion,” said lead author Ellen Roche, an M.D./Ph.D. candidate at SEAS who is also affiliated with the Wyss Institute. “They only take flow into account.”

What’s missing is the essential twisting motion that the heart uses to pump blood efficiently.

“We drew our inspiration for the soft actuated material from the elegant design of the heart,” said senior author Conor Walsh, assistant professor of mechanical and biomedical engineering at SEAS, founder of the Harvard Biodesign Lab, and a core faculty member at the Wyss Institute. “This approach could inspire better surgical training tools and implantable heart devices, and opens new possibilities in the emerging field of soft robotics for devices that assist other organs as well.”

The heart moves the way it does because of its bundles of striated muscle fibers, which are oriented spirally in the same direction and work together to effect motion.

To mimic those muscles fibers, the team first developed a modified pneumatic artificial muscle (PAM), made entirely from soft material—silicone elastomer with embedded braided mesh—and attached via tubing to an air supply. Upon pressurization, PAMs shorten, like biological muscles, but in one direction only.

The team then embedded several of these artificial muscles within a matrix made of the same soft silicone elastomer. By changing their orientation and configuration within the matrix and applying pressure, they were able to achieve various motions in more than one direction, mimicking the complex motion of the heart.

They calculated the force and strain values for an array of PAM arrangements and used them to develop a new computer model that simulates their associated movement patterns in 3D. 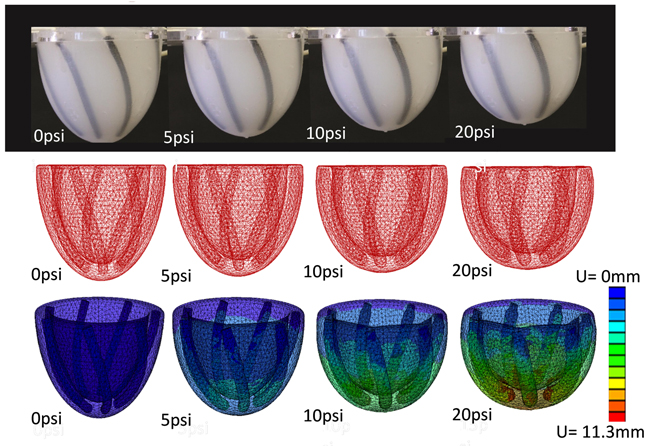 To achieve the heart’s 3D motion, the team embedded their soft modified PAMs—made of silicone elastomer in a braided mesh—in a matrix also made of soft silicone elastomer. The top images show the team’s heart prototype as it is subjected to various pressures. The middle images show a computer model of the mesh only as it deforms at corresponding pressures, and the third row is a computer model showing how the heart changes its motion in response to the different pressure regimes. U indicates displacement.

Of the heart’s three layers of muscle fibers, the outermost layer is the one most responsible for the dominant global twist—so the team used their computer model to identify a PAMs configuration within a cup-shaped matrix that most closely mimicked the fibers in the outermost layer of the heart. They built the prototype and attached motion trackers to see how it would respond when the PAMs were subjected to various pressures.

Their experimental results closely matched the computer model predictions and also corresponded to the available clinical data on the action of the ventricular twist.

“That was a great moment,” Roche said. “It means that now we have proof of concept that we can in fact mimic the heart’s natural 3D motion.” In short, they got their model hearts to do the twist.

What’s more, by selectively deactivating certain PAMs within the matrix, the team mimicked the kind of damage that happens to the heart muscle under certain disease conditions. For example, a diseased heart after a heart attack exhibits a less pronounced left ventricular twist due to local damage that extends through the heart wall.

Eventually the team hopes to develop biocompatible versions of the matrix as one of several next steps toward a new kind of implantable cardiac device, said Roche, who is coadvised by Walsh and by coauthor David J. Mooney, the Robert P. Pinkas Family Professor of Bioengineering at SEAS. Like Walsh, Mooney is also a core faculty member at the Wyss Institute.

“The motion of most mechanically active cardiac devices is currently tested in 2D,” said Don Ingber, Judah Folkman Professor of Vascular Biology, professor of bioengineering, and founding director of the Wyss Institute. “This new breakthrough provides a much better test-bed for these types of devices—and it could inspire a whole new class of cardiac therapies, such as improved ventricular assist devices that mimic natural heart motion.”

This work was funded by Harvard SEAS, the Wyss Institute, and the Fulbright International Science and Technology Award.

The heart prototype and the model perform the left ventricular twist: https://vimeo.com/87483470

This numerical model indicates how the heart motion changes as three PAMs are deactivated: https://vimeo.com/87483472

The motion of the heart prototype changes as three PAMs are deactivated: https://vimeo.com/87483471