The method also represents an early but important step toward building fully functional replacements for injured or diseased tissue that can be designed from CAT scan data using computer-aided design (CAD), printed in 3D at the push of a button, and used by surgeons to repair or replace damaged tissue.

“This is the foundational step toward creating 3D living tissue,” said Jennifer A. Lewis, senior author of the study, who is the Hansjörg Wyss Professor of Biologically Inspired Engineering at Harvard SEAS and a Core Faculty Member of the Wyss Institute. Along with lead author David Kolesky, a graduate student in SEAS with a fellowship from the Wyss Institute, Lewis' team reported the results February 18 in the journal Advanced Materials. 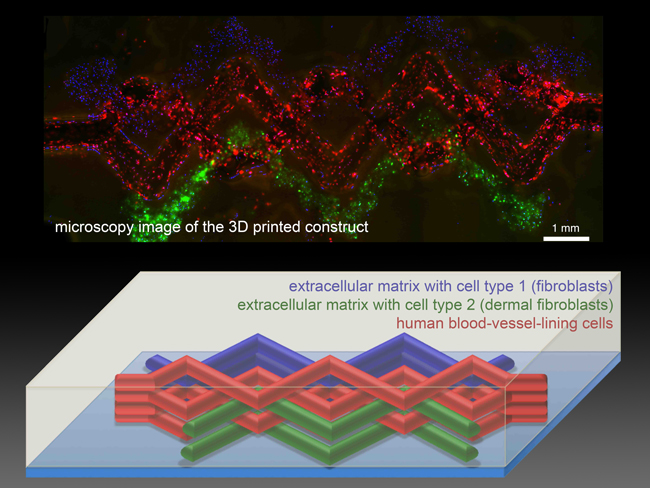 Tissue engineers have tried for years to produce lab-grown vascularized human tissues robust enough to serve as replacements for damaged human tissue. Others have printed human tissue before, but they have been limited to thin slices of tissue about a third as thick as a dime. When scientists try to print thicker layers of tissue, cells on the interior starve for oxygen and nutrients, and have no good way of removing carbon dioxide and other waste. So they suffocate and die.

Nature gets around this problem by permeating tissue with a network of tiny, thin-walled blood vessels that nourish the tissue and remove waste, so Kolesky and Lewis set out to mimic this key function.

3D printing excels at creating intricately detailed 3D structures, typically from inert materials like plastic or metal. In the past, Lewis and her team have pioneered a broad range of novel inks that solidify into materials with useful electrical and mechanical properties. These inks enable 3D printing to go beyond form to embed functionality. 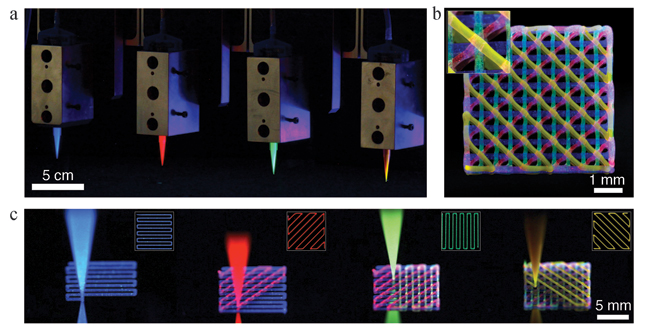 Multimaterial 3D printing can be achieved using four independently addressable printheads (a), as demonstrated here. The fluoresence image (b) shows a 4-layer lattice printed by sequentially depositing four PDMS inks (c), each dyed with a different fluorophore. (Images courtesy of Jennifer A. Lewis.)

To create blood vessels, they developed a third ink with an unusual property: it melts as it cools, rather than as it warms. This allowed the scientists to first print an interconnected network of filaments, then melt them by chilling the material and suction the liquid out to create a network of hollow tubes, or vessels.

The Harvard team then road-tested the method to assess its power and versatility. They printed 3D tissue constructs with a variety of architectures, culminating in an intricately patterned construct containing blood vessels and three different types of cells—a structure approaching the complexity of solid tissues.

Moreover, when they injected human endothelial cells into the vascular network, those cells regrew the blood-vessel lining. Keeping cells alive and growing in the tissue construct represents an important step toward printing human tissues. “Ideally, we want biology to do as much of the job of as possible,” Lewis said.

Lewis and her team are now focused on creating functional 3D tissues that are realistic enough to screen drugs for safety and effectiveness. “That’s where the immediate potential for impact is,” Lewis said.

Scientists could also use the printed tissue constructs to shed light on activities of living tissue that require complex architecture, such as wound healing, blood vessel growth, or tumor development.

“Tissue engineers have been waiting for a method like this,” said Don Ingber, Judah Folkman Professor of Vascular Biology and Professor of Bioengineering at Harvard and founding director of the Wyss Institute. “The ability to form functional vascular networks in 3D tissues before they are implanted not only enables thicker tissues to be formed, it also raises the possibility of surgically connecting these networks to the natural vasculature to promote immediate perfusion of the implanted tissue, which should greatly increase their engraftment and survival."

In addition to Lewis and Kolesky, the research team included SEAS graduate students Ryan L. Truby, A. Sydney Gladman, and Travis A. Busbee; and Kimberly A. Homan, a postdoctoral fellow at SEAS.

The work was funded by the Wyss Institute and the Harvard Materials Research Science and Engineering Center, which is supported by the National Science Foundation.