Since their development more than a decade ago, brain organoids — brain-like structures grown in petri dishes from human stem cells — have helped scientists better understand a range of neurological disorders, including schizophrenia, epilepsy, and autism spectrum disorders.

These pea-size bundles of cells proliferate, differentiate, and self-assemble into 3D tissues that mimic the architecture, diversity, and electric signaling of the human brain at early stages.

These powerful models could offer even more insight into early brain development if researchers could record individual neurons as they grow and develop over time. However, developing a non-invasive recording system that can stretch and fold with growing brain tissue has been difficult as most probes are either too rigid to interact with tofu-soft brain tissue or are limited to surface recordings.

Now, researchers from the Harvard John A. Paulson School of Engineering and Applied Sciences (SEAS) have embedded stretchable nanoelectronics into brain organoids, creating a cyborg brain organoid platform that can be used to record and study brain development over months. These cyborg organoids could be used for fundamental neuroscience as well as patient-specific drug screening to test how electrical signals in the brain change or evolve based on different drugs.

In 2019, Liu and his team developed a cyborg platform for cardiac organoids, offering a rare glimpse into the early stages of heart development.  In that research, the team developed stretchable mesh nanoelectronics that, when coupled with developing cardiac organoids, could seamlessly reconfigure themselves with the cells, resulting in fully-grown 3D organoids with embedded sensors.

In this research, the team needed to engineer nanoelectronics that could integrate into the much softer, much smaller brain tissue.

“The challenge is, when you make devices softer, there tends to be a lot of current leakage and cross talk among channels,” said Paul Le Floch, a former graduate student at SEAS and the Graduate School of Arts and Sciences and first author of the paper. “To address that, we developed a new fabrication process and device architecture that make the devices softer without losing efficiency.”

Brain activity is also much faster than cardiac activity. While cardiac cells fire for about a tenth of a second, neurons fire for about one millisecond. Brains are also slower to mature than hearts. Cardiac organoids reach maturation in a few weeks while brains develop for about half a year. To capture those quick signal bursts over the entire period of development, the team developed a high-speed, long-lasting sensor that could record at millisecond spatiotemporal resolution for six months

“By using this technology, we are seeing the electrical evolution of brain cells for the first time,” said Liu. “Cyborg brain organoids could be a really useful tool for both fundamental neuroscience and drug screening. Further integration of multifunctional sensors, such as chemical or mechanical sensors, would make this platform even more powerful in the future.”

Other co-first authors on this research are Qiang Li and Zuwan Lin. 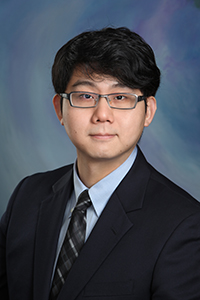