Not every company founder starts off knowing how to advertise their products and services. Start-ups, entrepreneurs and non-profit organizations sometimes have a broad idea, but lack the in-house staff to bring it to market.

That’s where groups like HSA-DEV come in. DEV, one of the student-run Harvard Student Agencies, specializes in developing websites and mobile applications for businesses. For several of its employees, DEV has been a great application of the computer science coursework they’ve done at the Harvard John A. Paulson School of Engineering and Applied Sciences (SEAS).

“Learning in my classes about systems, algorithms, how certain parts of the internet interact with each other, and current popular software in academia and industry has carried over really well into DEV,” said Paul Song, DEV managing director and a second-year student concentrating in computer science at SEAS. “There have been many situations where I’ve had to know the technical language and nuances of how certain software or programs interact, and a lot of that lingo can only come from either experience or in school. First learning it in school, and now being able to understand and apply the concepts I learned in school to my work, has been really beneficial.”

Song is one of several SEAS students currently employed at DEV. He joined last fall, having previously worked at Group Gear, another HSA organization.

“I thought this was the perfect intersection of technology and finance, which were my two big interests at the time,” Song said. “I took the position really eagerly, and it’s been the best six months I’ve had ever since.”

Soy Choi, DEV’s former chief executive officer, also joined DEV at the start of her second year at SEAS, where she studies biomedical engineering. She’d become interested in computer science after taking “CS50: Introduction to Computer Science” during her freshman year, and wanted to use what she’d learned with clients in a real-world setting.

“The computer science that I learned was obviously a very small sector of the whole computer science world,” Choi said. “I think a lot of people were shocked that I was chosen, because I didn’t have that much experience under my belt. So, the learning curve was pretty steep for me, but the whole training process was very exciting. I really resonate with the work that DEV does, so that’s what really excited me.”

Second-year computer science student Alex Estevez similarly joined DEV as an engineer after taking CS50. His interest in the field solidified further after taking “CS51: Abstraction and Design in Computation.”

“Taking CS51 and learning all about abstraction and proper code design has led me to write better code at work,” Estevez said. “And then getting to know coding shortcuts has made me a better programmer in my classes”

Employees at DEV are assigned to different projects and clients, then develop those projects through a combination of team meetings and open office hours. Most of the work was done remotely due to pandemic restrictions during the 2020-21 school year, but this year the DEV team has been able to work together in person.

“Before coming to Harvard, my idea of CS was that it was very individual and you’re just coding by yourself,” said Ashleigh Coltman, a second-year student concentrating in computer science and biomedical engineering who worked for DEV throughout 2021. “But it’s very much a team-oriented career. We all help each other, and everyone is super open. We’d review each other’s code and be there whenever anyone needed to debug.”

Prospective DEV employees go through a bootcamp during winter recess. Like Estevez, Coltman attended the bootcamp after taking CS50, and found DEV to be a great way to apply the skills and concepts they had learned.

“When you’re writing code for actual clients that will be updated later on, you want to make it as neat and readable as possible,” she said. “That limits the number of side effects that occur with your code and ensures it only does the exact goal you’re writing it for. As I was writing my code and reviewing my fellow engineers’ code, I found myself always trying to improve it, always trying to organize it in a better way.”

Among other projects, the DEV team designed the app for Giphting, which allows users to purchase and set up delivery for gifts bought at participating stores. The project required the team to learn how to program everything from a payment processing interface to a content management system that could update in real time.

“Things that I would usually take for granted, such as being sent a verification code, it’s been super interesting for me to see how that all works on the inside,” Estevez said.

For Choi, working with a South Korean apparel company required some out-of-the-box thinking. The company wanted actual design ideas and not just a website to sell them, which forced Choi’s team to take the processes in place for developing apps and adapt them into something entirely new.

“In order to help a client who’s working in, for example, the delivery industry, our team needs to in a sense become a professional in that field to help them,” Choi said. “Our job is not only to build a technical application or website, but to make the user experience extremely friendly. And in order to do that, we need to know a little bit more about that sector, which has led to a lot of opportunities to learn.”

DEV is one of many ways for SEAS students to fuse technical and business education, including the joint MS/MBA program with Harvard Business School (HBS), and the Undergraduate Technology Innovations Fellows Program run jointly by HBS and SEAS.

“It’s been a good balance,” Song said. “Most of the work that we do is for start-ups, entrepreneurs, non-profits, and people that are trying to break into the technology sector. I’ve learned about what fields are popular, what the market looks like, what kinds of new and innovative ideas people are coming up with. It’s really cool to have a tangible impact in the tech world.” 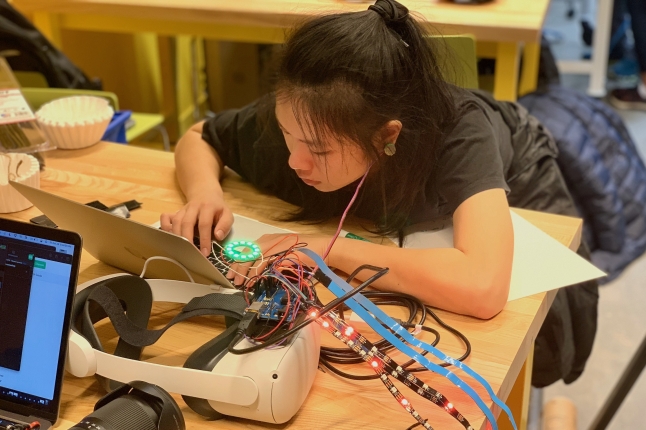 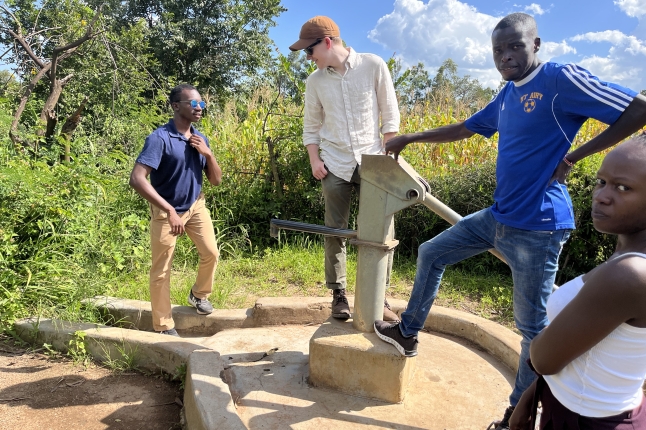