The Science and Engineering Complex (SEC) is charged with activity on the Friday night before Halloween. In one first-floor Makerspace, fourth-year student Umar Padela attaches wires to a remote-controlled airplane, while a few feet away graduate student Binita Gupta drills holes into a block of wood to assemble a simple pen holder.

One level down, student organizations hAR/VRd and Conflux are building jellyfish-like headsets for a project called the “Nervous Network,” which measures how a group of people respond to fear. The project uses virtual reality headsets connected via LED lights to heart monitors clipped onto participants’ ears. The lights are connected to form a web between everyone wearing the headsets, through which they watch a short horror movie. As everyone becomes more frightened, the flashing multicolored lights begin to speed up.

Students at the Harvard John A. Paulson School of Engineering and Applied Sciences (SEAS) clearly have a lot of ideas beyond their schoolwork and Friday nights at the SEC have emerged as the perfect time to gather to work on them.

“It’s a nice, relaxed space,” said Gupta, currently in the Master of Design Engineering program co-run by SEAS and the Harvard Graduate School of Design. “It lets you be creative, and everyone is really supportive.”

Friday night engineering sessions are organized through the Maker’s Collective and supported by SEAS funds earmarked for affiliated student organizations via the Teaching and Learning group. Club captain Joy Lin, a fourth-year mechanical engineering concentrator, remembered engineering nights at Pierce Hall before the pandemic, and wanted to reestablish the club to take advantage of the new Makerspaces.

“Last year, the place was kind of dead and empty, and we always wished we had either food or transportation to make it easier to get over here and make something,” Lin said. “We usually would only make stuff in the context of final projects or school work. We’d never make stuff for fun, and I really missed that.”

The Collective organized a few smaller gatherings last year, but this year the popularity of Friday night build sessions has greatly increased. Upwards of 50 students gathered at the late-October session, and the people, music and food combined to make the SEC a hub for the engineering community on campus.

“Having dedicated spaces for electrical engineering, mechanical engineering and machine shops – it’s really cool to have space for people to do whatever they want to do without bumping into each other,” said Adam McMullin, a fourth-year mechanical engineering student. “Everyone has a wide variety of projects they’ve been doing, which is cool to see. This club has really gotten more people involved with the Makerspace.”

The Maker’s Collective helps newer engineering students learn the skills to build their own projects, but club officers also pick one “official” project that multiple students can work on together. The group is currently building a split-flap display — like the displays at old train stations — which rotates through rolls of alphanumeric cards to quickly change the visible text.

“It’s modular, and you use the laser cutter, electronics, hardware assembly and many other good skills,” Lin said. “Everyone can build a piece and contribute to the larger project. You can just come in for a night, make something, and then never see us again. Hopefully incoming engineers can start with us, then graduate into more specialized clubs.”

Many such clubs also gather on Friday nights at the SEC. In the electrical engineering lab, part of the Harvard Satellite Team tests the wiring of their multi-year project to launch a cube satellite into orbit. More members of that group gather around a table in the lower-level student lounge, right next to the newly formed Harvard Undergraduate Automotive Society, which is building an electric go-kart.

“This experience has taught me how to actually get out and do something with your hands and learn skills like welding and milling,” said automotive society member Adam Reid. “It’s so much trial and error. You can sit there and do all the math all day on the most ideal configuration for the kart. But in the end, it’s a question of if we can actually make it work and build it.”

As Reid inspects his go-kart, other club members attach wheels to a series of electric skateboards. Just a few feet away, the Nervous Network slowly comes together.

“We created a social experience at the intersection of wearable tech, costume design, horror narratives, biosensors, and virtual reality,” said Alice Cai, co-founder of both hAR/VRd, a club dedicated to exploring virtual and augmented reality, and Conflux, which explores the intersection of art and technology. Added Conflux co-founder Peggy Yin, “Rarely are we conscious of subtle fluctuations in our internal states, yet our biosignals can convey multitudes about ourselves and others. Using long-exposure photography, we illuminated the otherwise internal effect of fright buildup during a shared scary experience”

Getting to build their personal projects isn’t just creatively satisfying for SEAS students – it also has educational value. Gupta came from a software engineering background and arrived on campus with almost no experience with building physical objects. The Maker’s Collective got her comfortable with tools such as the laser cutter, which in turn has broadened her approach to her schoolwork.

“Often, when we design, we design with the idea first, and method second,” Gupta said. “But here, when you pick up so many methods, you can actually start to think method-first or method and design at the same time. Because you know how to do it, you can figure out what to make after.”

The Maker’s Collective has helped students make up for missed opportunities to practice with certain machines during a period of remote education and greatly reduced their access to labs and machine shops over the last few years. McMullin has maintained his soldering skills thanks to Friday nights at the SEC, spending his Friday before Halloween soldering a light-up pumpkin to decorate his room.

“It’s good to maintain your skills with the machines every year, because if you go into design engineering it’s really important to understand how things are made so you can design something that’s easily manufactured,” he said. “A lot of people took virtual courses over the last couple years, so they didn’t get to learn how to use the mill and the lathe. Those are daunting tools if you don’t use them often, because they’re really big and loud. Now they’re getting the chance.” 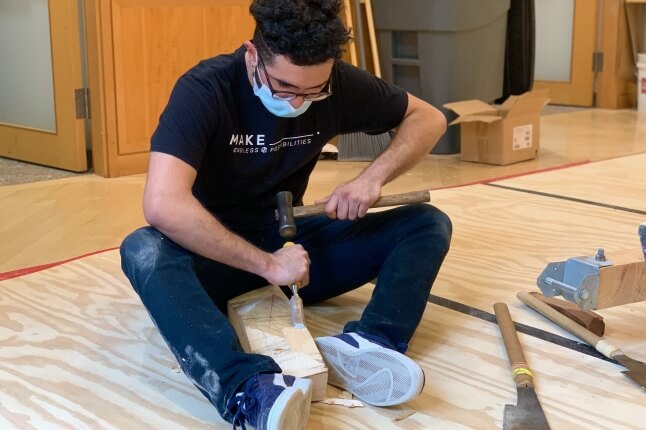 Branching out their engineering skills