TEL AVIV - February 11, 2010 - The international Dan David Prize, which annually awards three prizes of US $1 million each for outstanding achievement, announced today that Michael O. Rabin, Thomas J. Watson, Sr. Professor of Computer Science at the Harvard School of Engineering and Applied Sciences (SEAS), is among the 2010 laureates.

The other winners included Giorgio Napolitano, President of the Republic of Italy; and authors Amitav Ghosh and Margaret Atwood.

The Dan David Prize is named after international businessman and philanthropist Dan David and is headquartered at Tel Aviv University. The laureates, who donate 10% of their prize money towards 20 doctoral and postdoctoral scholarships, will be honored at a ceremony on May 9, 2010 at Tel Aviv University in the presence of the President of the State of Israel, Mr. Shimon Peres.

Rabin is one of the most prominent computer scientists of all time. His contributions during the last 50 years have been very significant, and touched many areas in the foundations of Computer Science.

Rabin's work (with Dana Scott) on Finite Automata, started the entire research area of automata theory, that became the foundation of all work on specification, design, and verification of computing systems.

One of the most influential contributions made by Rabin was the use of randomization in computing, which led to the construction of practical algorithms to solve problems that are otherwise unsolvable or intractable. One such algorithm, the Miller-Rabin primality testing, and others developed in its wake, were the basis of the successful implementation of public-key cryptography. This work is thus the cornerstone of the entire area of secure communication, which is absolutely essential in the internet age. Another problem efficiently solvable by a randomized algorithm was that of reaching an agreement in a distributed system. This work has far reaching implications on distributed computing, and will continue to shape electronic commerce, the internet, and mobile computing for years to come.

More recently, Rabin has continued to work on ways to improve privacy and create unbreakable ways to encrypt data. He introduced the ingenious notion of absolute security, based on a continuous stream of random bits that is to be beamed down from a satellite. Using his scheme, messages will be undecipherable even in the far future. This work is bound to have a tremendous impact in a future in which more and more sensitive information is transmitted on the internet and stored in databases, making secrecy, privacy and protection ever more crucial to society.

In recognition of his achievements Rabin has received the most prestigious honors in computer science, including the ACM Turing Award (considered by many to be the equivalent to a Nobel Prize in this area), and was elected to the world's most important academies. 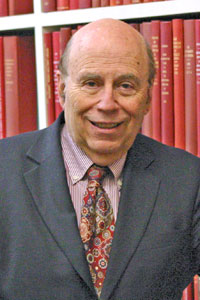