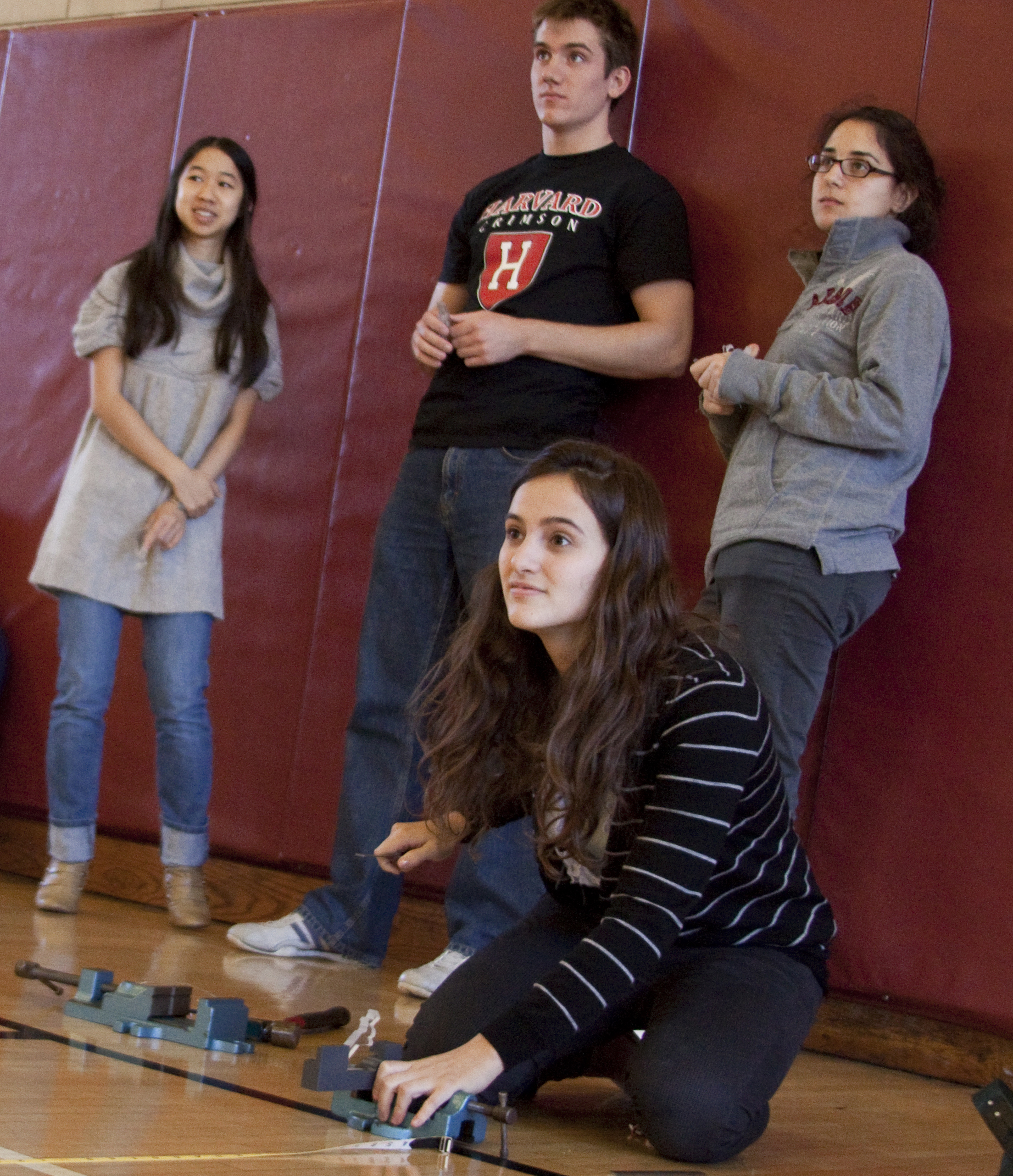 Amelia Lin '11, Daniel Bruder '12, Laura Freeman '12, and Juliana Cherston '13 (in front) look skyward as a Tootsie Roll rockets across the Hemenway Gym. Sending a sweet treat to new heights by means of a clever catapult is just one of the ways Harvard engineering students gain design experience.

"I THINK WE NEED A HIGHER CEILING!"

Harvard College senior Colin Saintangelo '11, his arms outstretched, ran a victory lap around the top floor of the Hemenway Gym as his classmates cried out in astonishment.

Saintangelo’s four-inch-long catapult, crafted from a single piece of polycarbonate plastic, had just thrown a Tootsie Roll almost the entire length of the gym—with a ricochet off the ceiling ductwork—and launched him to the top of his class.

It was just another day in ES 51, “Computer-Aided Machine Design,” where engineering students were putting their tiny catapults to the test and competing for the longest throw.

“I made it with a very low factor of safety,” Saintangelo said, of his winning design.

“I thought it was going to break. But it was kind of like trial and error. I made three iterations, each one closer to failure. Right before it fails, that’s when it goes the farthest."

"Next time I’ll angle it down so it doesn’t hit the ceiling,” he added.

“This assignment provides students with a hands-on design project through which they can apply the abstract concepts such as stress, strain, and stiffness that they have learned in class to the real world,” said Conor Walsh, a Visiting Lecturer at Harvard’s School of Engineering and Applied Sciences (SEAS), who teaches the course this semester.

The catapult project also exposes students to the methods of engineering design.

“This process involves determining design specifications, performing engineering analysis, and then iterating through prototyping and testing,” said Walsh. “Students learn that the design process is somewhat circular, so that analysis can be used to influence a design and, in turn, testing of a prototype can guide the analysis.”

This is Walsh’s first time teaching the course; fresh out of MIT with a Ph.D. in mechanical engineering that focused on the design of medical robotics, he brings new energy to the course.

In August, Walsh met with former course instructor Rob Howe (Abbott and James Lawrence Professor of Engineering, Area Dean for Bioengineering, and Associate Dean for Academic Programs) for some seasoned advice in planning the laboratory component of the fall syllabus.

"We discussed many different options that Prof. Howe had developed over the years," said Walsh, "but his excitement for this assignment stood out, so we made sure to include it in this year's class."

And this catapult contest is just the beginning: the students’ final project will involve building small cars and racing them around an obstacle course.

Running a course like this takes a lot of effort and teamwork, explains Walsh. The other ES 51 staff, Neil Tenenholtz and Barry Griffin '74, and teaching lab staff, Anas Chalah and Joe Ustinowich, were instrumental in making it happen.

Orozco originally planned to concentrate in statistics, but he soon switched to applied math and engineering, preferring the tangible applications.

“I love this class because it’s so different,” he said. “We got to go from theory in class, learning the equations, to applying them. We learned the whole engineering process, going from the model to actually building it, and dealing with all the problems that came up.”

For Laura Freeman '12, that meant following the consensus of her fellow students and opting for the polycarbonate as the building material of choice.

“It has the best properties, just based on its yield strength and Young’s Modulus," Freeman explained.

Freeman held first place for most of the contest, after her catapult threw the Tootsie Roll an impressive 45 feet.

A psychology concentrator, she elected to take ES 51 because she’s interested in applying the principles of psychology to product design.

“You learn something from failure too,” he laughed. “Certain assumptions I made limited the distance it could go, like how far it had to bend and how long it was. At least it went somewhere.”

At the end of the class, Walsh gathered the students and awarded prizes, including an umbrella and a pineapple—not to be used as projectiles. 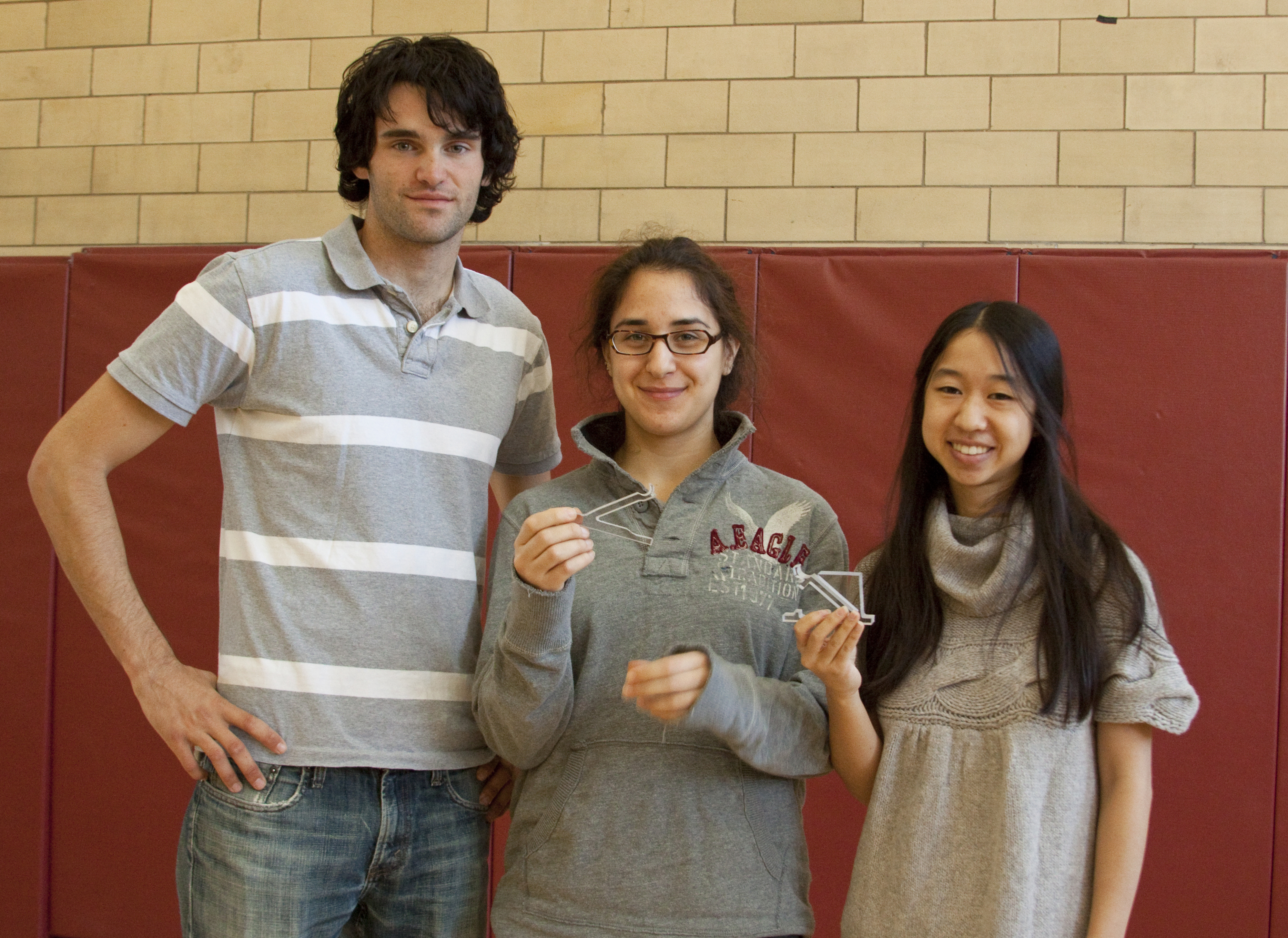 To view all of the photos from the event, visit the SEAS Flickr site. 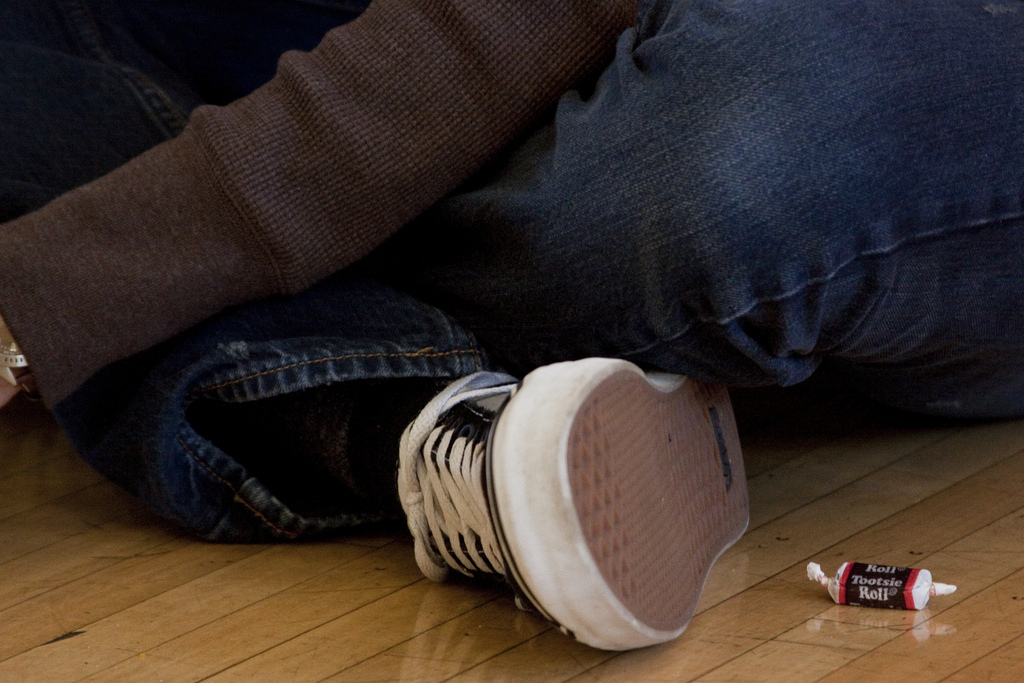 Design a one-piece catapult that can be carved from a piece of plastic the size of an index card.

For the contest, the students were asked to select one of five materials:

Applying physical equations to their knowledge of the materials’ properties—such as density and maximum tensile stress—they created a 3D model of the catapult using SolidWorks graphics software. 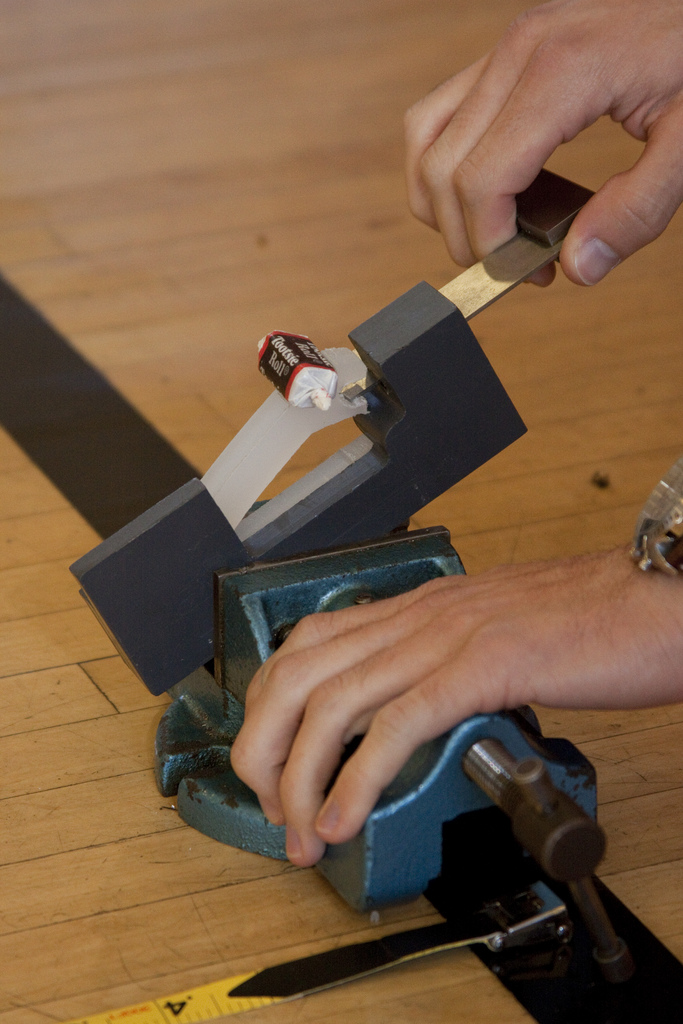 Then, provided with a half-inch-wide block of their chosen material, they used machine tools to carve out the V-shaped spring.