Five Harvard John A. Paulson School of Engineering and Applied Sciences (SEAS) students were recently named Rhodes Scholars. Whether it’s improving health care in lower-income tropical nations, using data science to create more equitable policies and regulations, or creating a framework to translate the natural world into robotics, all five students will head to Oxford University next year with a clear plan and a desire to see their education in action.

“Part of the reason I was interested in being a Rhodes Scholar is because I wanted to be around people that went from finding solutions to applying them,” said Henry Cerbone. “You’re constantly interrogating who you are in these applications, why you’re doing what you’re doing and why it’s important. In some ways I think it’s a very good and psychologically healthy thing to do. And now that I’ve won, it all feels worth it.”

Cerbone’s special concentration, “Ontology of Autonomous Systems,” combines aspects of biology, computer science, robotics, math and philosophy. By understanding the mathematics and mechanics of biological organisms, Cerbone hopes to make it easier for roboticists to use biology as inspiration for new designs. He plans to study biology at Oxford, then return to the U.S. for a Ph.D. in robotics.

“I think a lot of the world’s solutions lie in some degree of biological inspiration, and that’s what I’m interested in transitioning into as I move on in my journey,” Cerbone said. “If you want to do bio-inspired robotics, you need to have a strong fundamental knowledge of the organisms you’re trying to replicate.”

Marcus Montague-Mfuni, a South African Rhodes Scholar studying computer science and psychology, is a member of the Moral Psychology Research Lab. He’s currently studying how humans process causality and cause and effect, combining elements of his two concentrations.

“I use some machine learning and data science methods to help improve computational models of our brain and social behaviors,” he said. “I started by studying things like oppression, bias and discrimination, and I’ve added moral psychology to my research on society and social policy.”

The Rhodes Scholar application process can take months. Many of the SEAS winners began the process last spring with personal and academic essays, then spent the summer soliciting faculty letters of recommendations. Once Harvard picked which students to endorse, they then went through multiple rounds of interviews before the winners were announced in November.

“You have to have this cognitive dissonance,” said Isaac Robinson, a math and computer science concentrator. “The odds are so impossible, because everyone is so incredibly qualified and there are so few spots. It takes so much work to apply that you kind of have to put aside reason to even decide to go through the process, because winning is so unlikely.”

Robinson, a U.S. Rhodes Scholar, studies with Cynthia Dwork, Gordon McKay Professor of Computer Science. He’s interested in the intersection of government and technological innovations such as artificial intelligence, whether that’s policies to address biases in AI, or using computational techniques to address inequities in government policy.

“These are things that have very real impacts on who gets elected and what policies get enacted,” Robinson said. “We’ve seen that algorithms can be really harmful if they’re left to their own devices, because they really are only taught to optimize for one specific thing, which can have unintended consequences. However, you also don’t want to just shut down the industry, because we’ve seen that technology has brought an improvement in living standards across the globe over the last few centuries since the industrial revolution. So, we want to both make sure innovation still happens, but spreads quality-of-life improvements equally across groups and geography.”

Sílvia Casacuberta Puig, a Global Rhodes Scholar, who also studies math and computer science, also has Dwork as an advisor, as well as Salil Vadhan, Vicky Joseph Professor of Computer Science and Applied Mathematics. Planning to pursue a joint master’s degree in both fields, Casacuberta is also interested in the ideas of algorithmic fairness and privacy, areas she’s studied through her senior thesis and the OpenDP group at SEAS. She hopes to continue her studies at the Oxford Internet Institute.

“As computer scientists, our research impacts society, so these are all issues that have to be taken into account with our research,” she said. “What really fascinates me about differential privacy and algorithmic fairness is that it’s not just about realizing that these are consequences we’re responsible for. But on the bright side, we’re saying we can use mathematics to rigorously tackle these topics.”

Lauren Kim, also a U.S. Rhodes Scholar, studies chemistry and bioengineering and is passionate about bringing medical innovation to lower-resource nations. She plans to study subjects such as medical anthropology and international health at Oxford before going to medical school. Kim co-founded Project Cascade, a community-based health project in Uganda. She also leads Raise Uganda Now, a student organization working to improve the lives of Ugandan orphans

“I’ve done a bunch of research at Harvard in nanotechnology, and currently my research is more on infectious diseases and translating the work to lower-resource communities,” Kim said. “Because these communities are low-resourced and don’t necessarily have the proper infrastructure in place for advanced treatments, we want to try to make healthcare more community-oriented, and try to improve the local capacity of these communities so they can develop and implement high-quality healthcare services.”

Being named a Rhodes Scholar was a “surreal” experience for Kim. Other winners described it as a “shock,” sometimes eliciting screams loud enough to alert their roommates that they’d won. Whatever their reaction, it meant they’ll now have an opportunity very few students ever get. 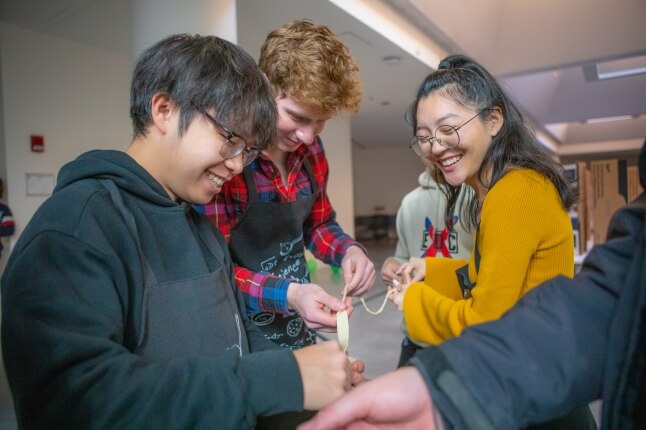