By Lauren Marshall and Kate Range, Harvard Gazette
May 22, 2013
FacebookTwitterEmailLinkedIn 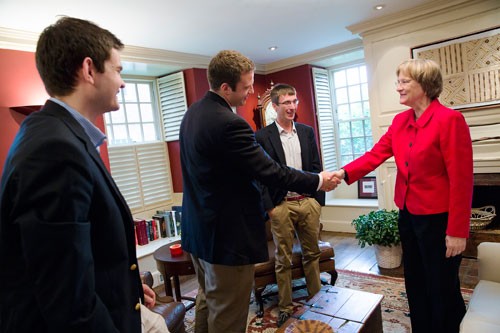 Three Harvard College seniors will graduate from the University this spring with more than a college diploma; each will also carry the distinction of award-winning entrepreneur.

Today President Drew Faust named Team Nucleik the grand prize winner of the Harvard University President’s Challenge for social entrepreneurship, hosted by the Harvard Innovation Lab (i-lab). Faust developed the challenge last year to support students from across the University who were interested in developing entrepreneurial solutions to some of the world’s most important social problems. This year’s competitors tackled five topic areas: learning, energy and the environment, health, disaster preparation and relief, and the arts.

Team Nucleik will receive $70,000 to support its emerging business based on the software management information system team members developed while at Harvard for law enforcement officers.

“I spoke with the members of Team Nucleik earlier this month at the President’s Challenge Demo Day and was struck by their commitment to pursuing an idea and applying what they had learned in the classroom to improve the lives of others,” said Faust. “They’ve built a tool that will help law enforcement professionals better serve and protect communities across the country, and their inspiring work is something I will follow with great interest in the months and years ahead.”

“Almost one and a half million gang members from 33,000 active gangs are responsible for 48 percent of the violent crime in the United States. We have a real problem with violent crime in the U.S., and technology can help solve it,” said Crouch. “There are many creative entrepreneurs — so many unbelievably talented people — out there, and they were all completely missing this issue.”

The system Nucleik developed provides instantaneous access to accurate and organized data to help law enforcement officers tackle gang violence, murders, and violent crime. It has been employed by the Special Projects Team of the Massachusetts State Police in Springfield, helping slash the time spent on office paperwork by 90 percent. The fledgling company is also in talks to launch the platform in several other major metropolitan police departments.