Venture fund based at Harvard celebrates first year in business

By Paul Karoff
May 21, 2013
FacebookTwitterEmailLinkedIn

When a group of Harvard alumni formed the Experiment Fund (Xfund) a little over a year ago, they were hoping that their seed fund would nourish a burgeoning entrepreneurial culture on campus—and beyond—and make a profit as well.

New companies are spawned in garages, basements, and at kitchen tables everywhere. But the most productive environments for incubating new companies are invariably centered around a major university (or several). Such communities mix together the key ingredients—brilliant young minds, experienced mentors, and willing investors—that formulate the “special sauce” for start-ups. Still, aspiring entrepreneurs and mentors who know how to turn a vision into a new business typically meet by chance. Tapping into venture funding is a further hurdle.

The goal of the Xfund is to break down barriers and increase the likelihood that the stars will align. 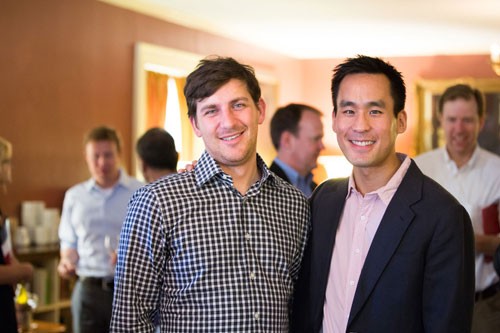 Andrew McCollum '07, Ed.M. '11, and Patrick Chung '96, MBA-JD '04, catch up at the 2013 Experimenter Assembly. McCollum is a co-founder of Facebook and an angel investor. Chung is one of five partners of the Experiment Fund. (Photo by Joseph Ong.)

While anchored at Harvard, the Xfund serves the greater Cambridge and Boston area, investing in companies and teams regardless of their university affiliation or background. In addition to strong connections with the Harvard Innovation Lab (i-lab), the Xfund has ties to the MIT Media Lab and other local academic and entrepreneurial resources.

“The Xfund has accelerated the level of interaction between first-time student entrepreneurs and potential investors and mentors,” says Ho Tuan ’09, co-founder of Tivli, a start-up that lets college students stream television programming directly to their computers. The company was launched in a Harvard dorm room and is one of the first ventures to receive seed investment from the Xfund.

“Through institutions like the Xfund, we'll quickly see more start-ups and better start-ups with better mentorship and better funding opportunities,” says Tuan, whose start-up today reaches thousands of students on campuses around the country. Currently run out of the Harvard i-lab, the company recently reached a groundbreaking deal to include HBO programming in its live mix.

During the Xfund’s first year of operation, the partners reviewed more than 1,500 proposals, ultimately providing early-stage support to three start-ups.

“There are basically two approaches to venture capital investing,” said Xfund Partner Harry Weller, MBA ‘98, who is also General Partner of New Enterprise Associates. “One is to ‘spray and pray,’ and the other is to make fewer, more selective investments. We back big, bold experiments.” 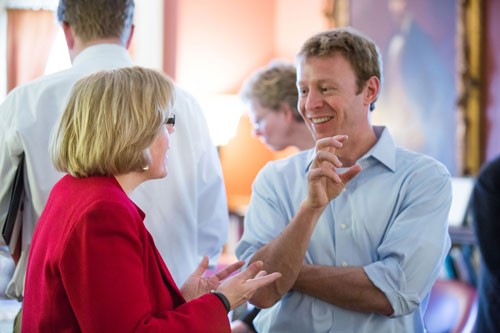 So far, the Xfund has provided financial investment to Tivli, Rock Health, a healthcare technology incubator, and to Zumper, a venture that is creating an efficient and transparent online market for apartment rentals.

“We designed the Xfund to be the fund we wish we had as entrepreneurs,” said Hugo Van Vuuren '07, MDesS ’12, one of five partners. “It is an experiment in and of itself.”

“Fundamentally, the Xfund is mission-driven,” said Alan Crane ’86, MBA ‘92, another Xfund partner who is also General Partner of Polaris Ventures. “It’s much broader than investing in great companies. We’re also investing in the innovation ecosystem at Harvard.”

Weller echoed the sentiment. “It’s not just about innovation. It’s also the creation of new things, including the creation of leaders. Harvard is such a great place to find leaders and a lot of Harvard alumni just want to help by providing mentoring and advice.”

Many of the partners have ties to the Harvard School of Engineering and Applied Sciences (SEAS), which serves as a campus home for the Xfund. SEAS Dean Cherry A. Murray was an early and enthusiastic supporter of the concept.

“SEAS is a catalyst for entrepreneurship across the University,” Murray said. “We have more than 700 undergraduate concentrators and 10 percent of them want to start companies—and are actively working to do so.” In a further extension of the partnership, she said, the Xfund is working closely with a number of SEAS faculty who teach courses that emphasize translating innovation into commercial applications. 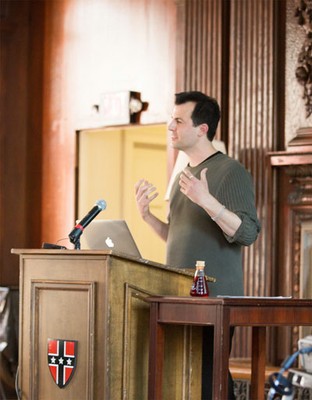 One of those instructors is David Malan ‘99 (pictured at right), senior lecturer on computer science, whose CS 50 course drew the largest enrollment of any Harvard College class this fall. Malan asks students to solve a real-world problem, and several projects have led to spinoffs. During a public Experimenter Assembly held to celebrate the Xfund’s first year of operation, partner Patrick Chung (AB ‘96, MBA ’04, JD ’04 and co-head of the New Enterprise Associates Seed Fund) presented Malan with the 2013 Experimenter Award.

“David and CS 50 embody what we’re trying to do at the Xfund,” Chung said.

According to Murray, the Xfund is one of the key levers for building up a culture of entrepreneurship within SEAS and across Harvard. Others include the i-lab, near Harvard Business School, and the SEAS-based Technology and Entrepreneurship Center at Harvard (TECH), which runs the Harvard College Innovation (I3) Challenge.

“Entrepreneurship already appears daunting and fraught with risk, especially for students and fresh graduates who've never done it before,” said Tivli co-founder Tuan. “At Harvard, efforts to promote entrepreneurship on campus have led to the fast growth of a vibrant and diverse community that never would have existed only five years ago.”