Cambridge, Mass. – March 9, 2015 – At least two thousand years before the ancient Egyptians began mummifying their pharaohs, a hunter-gatherer people called the Chinchorro living along the coast of modern-day Chile and Peru developed elaborate methods to mummify not just elites but all types of community members—men, women, children, and even unborn fetuses. Radiocarbon dating as far back as 5050 BC makes them the world’s oldest man-made mummies. 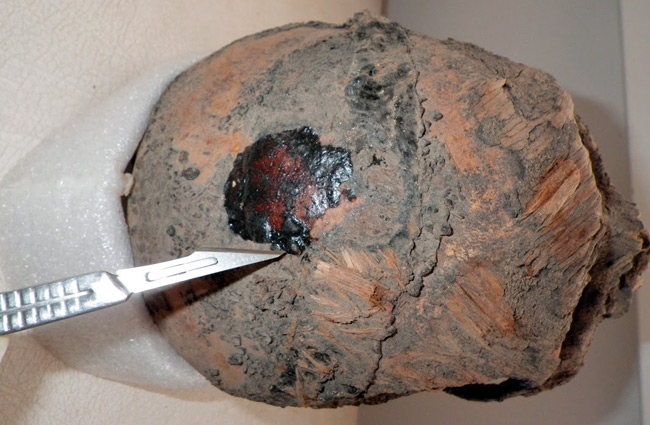 The head of a Chinchorro mummy at San Miguel de Azapa Museum in Arica, Chile. (Photo courtesy of Marcela Sepulveda.)

But after staying remarkably well preserved for millennia, during the past decade many of the Chinchorro mummies have begun to rapidly degrade. To discover the cause, and a way to stop the deterioration, Chilean preservationists turned to a Harvard scientist with a record of solving mysteries around threatened cultural heritage artifacts.

Nearly 120 Chinchorro mummies are housed in the collection of the University of Tarapacá’s archeological museum in Arica, Chile. That’s where scientists noticed that the mummies were starting to visibly degrade at an alarming rate. In some cases, specimens were literally turning into a black ooze.

“In the last ten years, the process has accelerated,” said Marcela Sepulveda, professor of archaeology in the anthropology department and Archeometric Analysis and Research Laboratories at the University of Tarapacá who specializes in materials characterization, during a recent visit to Cambridge. “It is very important to get more information about what’s causing this and to get the university and national government to do what’s necessary to preserve the Chinchorro mummies for the future.” 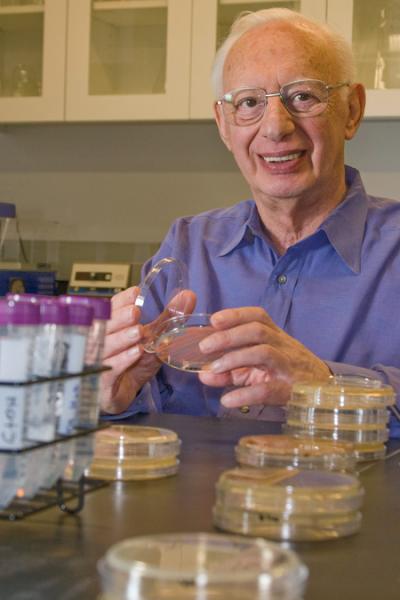 What was eating the mummies? To help solve that riddle Sepulveda called on experts in Europe and North America, including Ralph Mitchell, Gordon McKay Professor of Applied Biology, Emeritus at Harvard School of Engineering and Applied Sciences (SEAS). Mitchell has used his knowledge of environmental microbiology to pinpoint the causes of decay in everything from historic manuscripts to the walls of King Tutankhamen’s tomb to the Apollo space suits.

“We knew the mummies were degrading but nobody understood why,” Mitchell said. “This kind of degradation has never been studied before. We wanted to answer two questions: what was causing it and what could we do to prevent further degradation?”

Preparing the mummies “was a complicated process that took time—and amazing knowledge,” Sepulveda said. The Chinchorro would first extract the brains and organs, then reconstruct the body with fiber, fill the skull cavity with straw or ash, and use reeds to sew it back together, connecting jaw to cranium. A stick kept the spine straight and tethered to the skull. The embalmer restored the skin in place—sometimes patching the corpse together using the skin of sea lions or other animals. Finally, the mummy was covered with a paste, the color of which archeologists assign to different epochs in the more than 3,000 years of Chinchorro mummy-making—black made from manganese was used in the oldest ones, red made from ocher in later examples, and brown mud had been applied to the most recent finds. 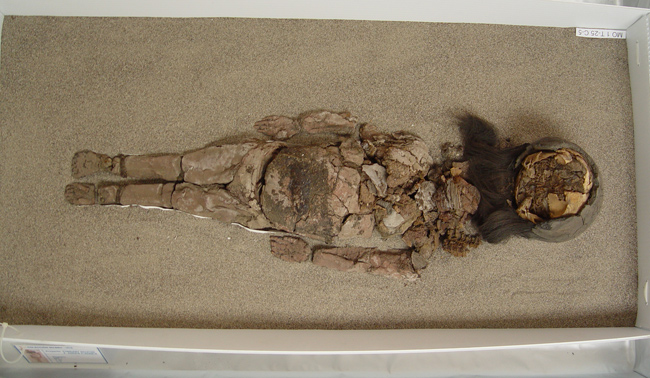 The first thing that Mitchell and his team needed was physical evidence, something Sepulveda supplied in the form of samples—both degrading skin and undamaged skin—taken from mummies in the museum’s collection. The task of receiving the unusual shipment fell to Alice DeAraujo, a research fellow in Mitchell’s lab who also played a lead role in analyzing the samples as part of her thesis for a master’s degree in biology at Harvard Extension School.

It became apparent to DeAraujo and Mitchell that the degradation was microbial. Now they needed to determine if there was a microbiome on the mummy skin that was responsible. 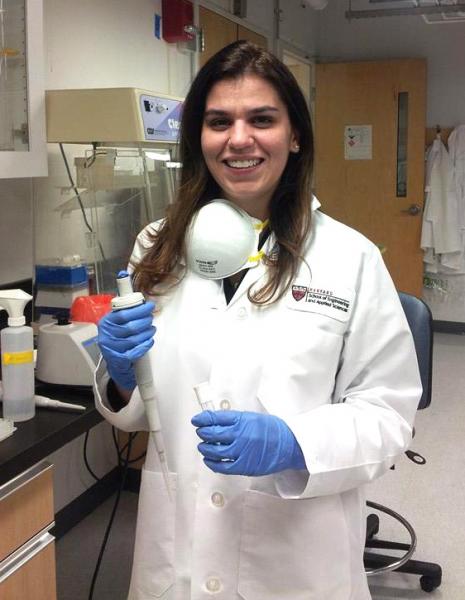 “The key word that we use a lot in microbiology is opportunism,” Mitchell said. “With many diseases we encounter, the microbe is in our body to begin with, but when the environment changes it becomes an opportunist.”

Mitchell had a series of questions: “Is the skin microbiome from these mummies different from normal human skin? Is there a different population of microbes? Does it behave differently? The whole microbiology of these things is unknown.”

The pair isolated microbes present in the samples of both the degrading skin and uncompromised skin. But since there was only a limited amount of mummy skin, they needed a surrogate for the next step: culturing the organisms in the lab and testing them to see what happened when the samples were exposed to different humidity levels. Using pig skin acquired from colleagues at Harvard Medical School, DeAraujo began a series of tests. After determining that the pig skin samples began to degrade after 21 days at high humidity, she repeated the results using mummy skin, confirming that elevated moisture in the air triggers damage to the skin.

This finding was consistent with something that Sepulveda reported: humidity levels in Arica where the archeological museum is located have been on the rise.

DeAraujo’s analysis suggested that the ideal humidity range for mummies kept in the museum was between 40 percent and 60 percent. Any higher and degradation could occur; any lower and equally damaging acidification was likely. Further testing is needed to assess the impact of temperature and light.

The results will help museum staff fine-tune temperature, humidity, and light levels to preserve the mummies in their extensive collection, Mitchell said. But he is keen to solve an even larger challenge. 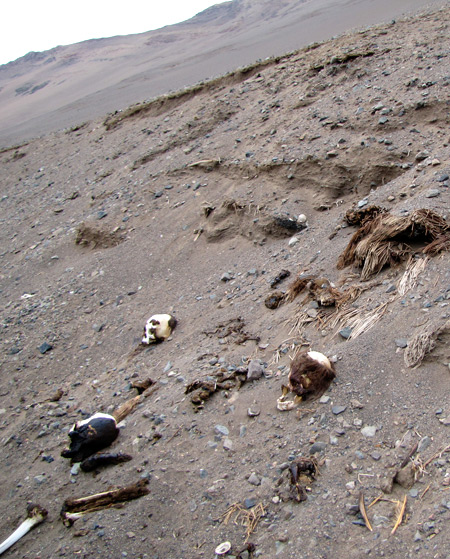 In the valleys of northern Chile, where the Chinchorro people lived 7,000 years ago, large numbers—perhaps hundreds—of mummies are buried just beneath the sandy surface. (Photo courtesy of Marcela Sepulveda.)

According to Sepulveda and others there are large numbers—perhaps hundreds—of Chinchorro mummies buried just beneath the sandy surface in the valleys throughout the region. They are often uncovered during new construction and public works projects. Rising humidity levels may make the unrecovered mummies susceptible to damage as well. While the degradation process is relatively controlled at the museum, it is worse in sites exposed to the natural environment.

“What about all of the artifacts out in the field?” Mitchell asks. “How do you preserve them outside the museum? Is there a scientific answer to protect these important historic objects from the devastating effects of climate change?”

The solution to the challenge of preserving the 7,000-year-old Chinchorro mummies, Mitchell believes, may draw from 21st-century science. “You have these bodies out there and you’re asking the question: How do I stop them from decomposing? It’s almost a forensic problem.”

Others who contributed to the research include Vivien Standen, Bernardo Arriaza, and Mariela Santos of the University of Tarapacá, and Philippe Walter from the Laboratoire d’Archéologie Moléculaire et Structurale in Paris. 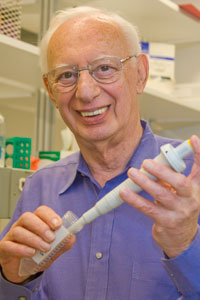