Researchers explore how to effectively release and control engineered species

So, you’ve genetically engineered a malaria-resistant mosquito, now what? How many mosquitos would you need to replace the disease-carrying wild type? What is the most effective distribution pattern? How could you stop a premature release of the engineered mosquitos?

Releasing genetically engineered organisms into an environment without knowing the answers to these questions could cause irreversible damage to the ecosystem. But how do you answer these questions without field experiments?

Applied mathematicians and physicists from Harvard and Princeton Universities used mathematical modeling to guide the design and distribution of genetically modified genes that can both effectively replace wild mosquitos and be safely controlled.

The research was recently published in the Proceedings of the National Academy of Sciences.

In the normal course of evolution, any specific trait has only a modest chance of being inherited by offspring. But, with the development of the CRISPR-Cas9 gene editing system, researchers can now design systems that increase the likelihood of inheritance of a desired trait to nearly 100 percent, even if that trait confers a selective disadvantage. These so-called gene drives could replace wild-type genes in short generations. 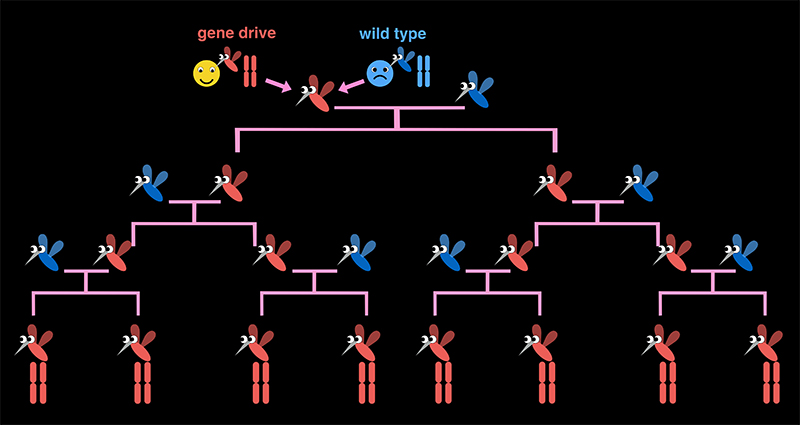 Super-mendelian genetics increases the likelihood of inheritance of a desired trait to nearly 100 percent, even if that trait confers a selective disadvantage (Image courtesy of Hidenori Tanaka/Harvard)

Those powerful systems raise serious safety concerns, such as what happens if a genetically-engineered mosquito accidentally escapes from a lab?

“An accidental or premature release of a gene drive construct to the natural environment could damage an ecosystem irreversibly,” said Hidenori Tanaka, first author of the paper and graduate student in the Harvard John A. Paulson School of Engineering and Applied Sciences and the Physics Department.

To protect against such releases, Tanaka, along with co-authors David Nelson, the Arthur K. Solomon Professor of Biophysics and Professor of Physics and Applied Physics and Howard Stone, the Donald R. Dixon ’69 and Elizabeth W. Dixon Professor of Mechanical and Aerospace Engineering and Department Chair at Princeton University, proposed a narrow range of selective disadvantages that would allow the genes to spread, but only after a critical threshold had been reached.

The researchers used nonlinear reaction-diffusion equations to model how genes would move through space. These models provided a framework to develop socially responsible gene drives that balance the genetically-engineered traits with embedded weaknesses that would protect against accidental release and uncontrollable spreading.

“We can, in effect, construct switches that initiate and terminate the gene drive wave,” said Tanaka. “In one, carefully chosen regime, the spatial spreading of the wave starts or progresses only when the parameters of the inoculation exceed critical values that we can calculate.”

To reach that critical mass, the researchers found that genes needed to be released intensely in a specific region — like a genetic bomb — rather than spread thinly throughout larger regions. The genes spread only when the nucleus of the genetic explosion exceeds a critical size and intensity.

The researchers also found that by making gene drives susceptible to a compound harmless to wildtype genes, the spread of gene drives can be stopped by barriers like pesticides.

“This research illustrates how physicists and applied mathematicians can build on results of biological experimentation and theory to contribute to the growing field of spatial population genetics,” said Nelson.

Next, the researchers hope to understand the impact of genetic mutations and organism number fluctuations on gene drives.

This research was supported by the National Science Foundation through the Division of Materials Research, Condensed Matter and Materials Theory and through the Harvard Materials Science Research and Engineering Center.