When Renita Horton walked into a Harvard John A. Paulson School of Engineering and Applied Sciences (SEAS) research lab this summer, she felt like she was going back in time.

More than a dozen years ago, Horton was a nervous undergrad from Mississippi State University (MSU), spending the summer miles from home, and miles outside her comfort zone, in the Research Experiences for Undergraduates (REU) Program.

Now an assistant professor at MSU, Horton, Ph.D. ’14, returned this summer as a scientific colleague to work on a project in the lab of former advisor Kit Parker, Tarr Family Professor of Bioengineering and Applied Physics. But she’s not alone. Horton is working alongside an undergraduate from her lab at MSU, Sydney Reed, who followed her mentor’s footsteps, and advice, into Harvard’s REU program.

“The REU program helped me get a better idea of what engineers can do,” Horton said. “I never really thought of my recommending the program to Sydney as paying it forward, but I enjoy playing a role in helping a student figure out their own path. I think Sydney has an idea of what she wants to do, but it is good to broaden your horizons and see what’s out there.” 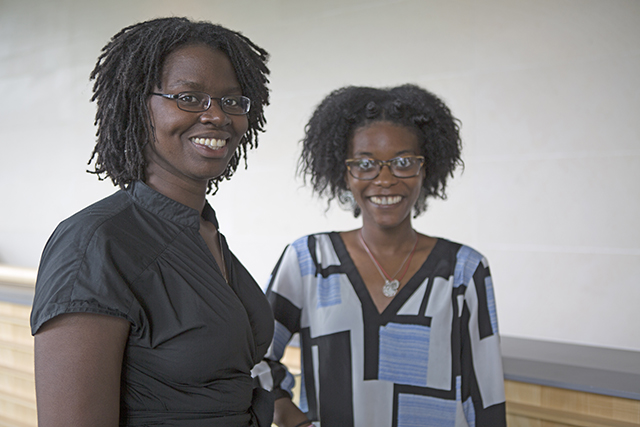 (Left) Renita Horton, Ph.D. ’14, encouraged Sydney Reed (right), an undergraduate who works in her lab at Mississippi State University, to enroll in the Research Experience for Undergraduates program to broaden her horizons. (Photo by Adam Zewe/SEAS Communications)

She speaks from experience.

One of her chemical engineering professors introduced her to Howard Stone, then Vicky Joseph Professor of Engineering and Applied Mathematics at SEAS, who was visiting MSU to give a lecture. Stone, whose research focuses on fluid dynamics, suggested the budding engineer apply to the REU program to learn about the vast possibilities of a research career.

Horton spent the next summer in Stone’s lab, using microfluidics to study the effects of alcohol on red blood cells.

“That experience opened my eyes to the power of research, and to the Harvard atmosphere, as well,” she said.

Horton decided to pursue a Ph.D., and Stone convinced her to apply to SEAS, even though she was certain she wouldn’t be admitted. But she proved herself wrong, starting her graduate studies with Debra Auguste, assistant professor of bioengineering, (Auguste is now Professor of Chemical Engineering at Northeastern University) and finishing her biomedical engineering degree in Parker’s lab.

“I was really drawn towards the potential of this research,” she said. “Models such as these have the potential to reduce the number of animals needed for research, and with the use of induced pluripotent stem cells, these models can be humanized, which can lead to more relevant results.” 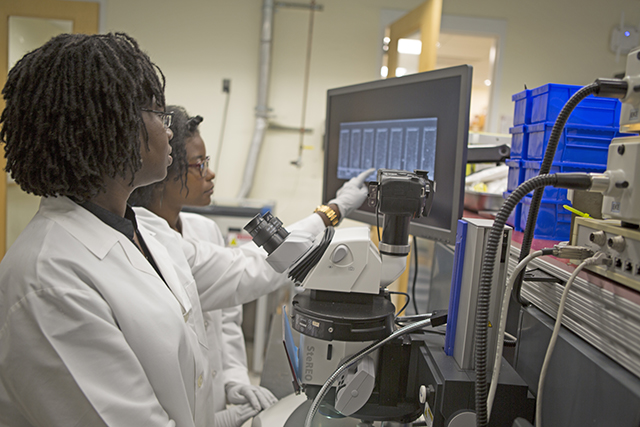 After completing her Ph.D., and a postdoctoral fellowship at the Wyss Institute for Biologically Inspired Engineering, she joined the MSU faculty. Setting up a lab and building a successful research program have presented a new set of challenges.

Drawing on her work at Harvard, she uses microfluidic devices and organs-on-a-chip to study sickle cell disease, a hereditary blood disorder that causes the body to produce abnormally shaped red blood cells. Horton explores the comorbidities and cardiovascular consequences of the disease, which impacts nearly 5 million people worldwide.

She is also seeking to partner with the University of Mississippi Medical Center to conduct drug trials using organs-on-a-chip. That work is especially important, since one of the main drugs used to treat sickle cell anemia, Hydroxyurea, works well for some patients, but is ineffective in others.

“I’m interested in understanding why these differences occur when the patients have the same genetic mutation,” she said. “If we can better understand how patients will potentially respond to a drug, then maybe we can use these chips to develop specific treatment strategies for each individual.” 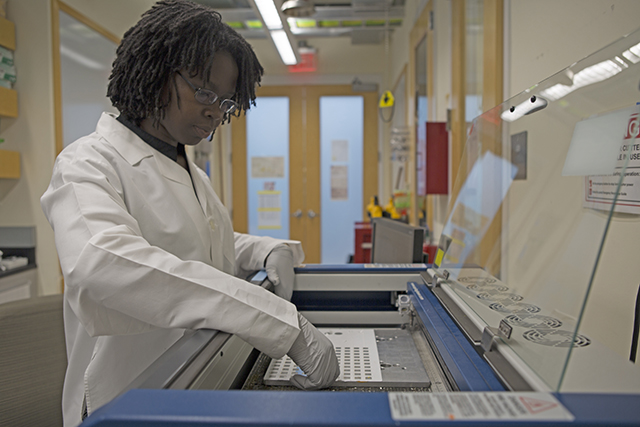 Renita Horton, Ph.D. ’14, assistant professor at Mississippi State University, returned to SEAS this summer to conduct research in the lab of her former mentor. (Photo by Adam Zewe/SEAS Communications)

“My older sister had sickle cell disease, so I watched her progress through that. The longer you live with it, the more complications you have, so she eventually had issues with her lungs and liver,” she said. “Individuals with sickle cell disease are at risk of suffering strokes, cardiovascular complications, and chronic pain. The sickling of red blood cells and vaso-occlusions, blockages within blood vessels that prevent oxygen from being transported properly, are central issues with sickle cell disease. What fuels me is being able to contribute, in some way, to helping patients.”

A desire to help patients also fueled Reed’s dive into research. Fascinated with the power of microfluidics to make a difference for individuals suffering from diseases, Reed joined Horton’s lab and began working on imaging projects.

When she wanted to broaden her research horizons, Horton, passed on some of the best advice she received as an undergrad, suggesting that Reed apply for the REU program.

In the Parker lab, Reed is examining pancreatic islet cells. Her work seeks to help researchers better understand microenvironmental cues that promote islet cell growth and function so that they can create human cell-based models for studying diabetes. 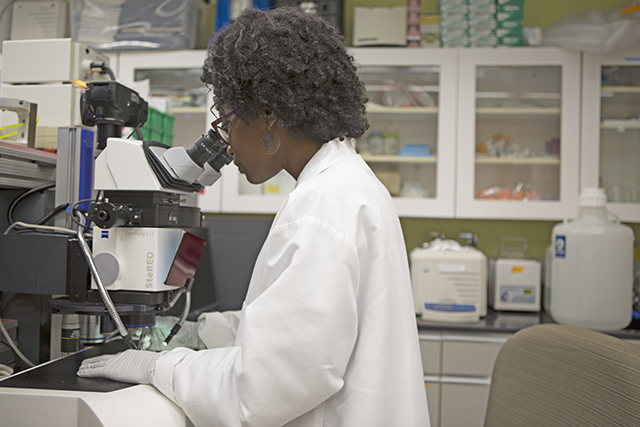 “It is exciting to work on something that could have an effect on diabetes treatment,” she said. “Especially being from the South and being African American, a lot of people I know are affected by diabetes—my grandmother has the disease. Just to be able to contribute in an area where I have a personal connection is rewarding.”

In addition to honing her lab skills, Reed has had the opportunity to explore new technologies, from novel microfluidic devices to microcontact printing, a technique to transfer molecules onto surfaces using a polymer-based stamp.

Ultimately, Reed hopes to channel her research skills into a career in medicine, and perhaps pursue an M.D.-Ph.D. so she can help patients while also contributing to a wider body of research.

“Just seeing Dr. Horton, and how she has gone down this path and how successful she is, has really inspired me to keep pushing, to keep working hard to get where I want to be,” Reed said. “She has opened a lot of doors for me, not only to do research, but to imagine what I want to be and what I can do when I put my mind to it.”

For Horton, working closely with undergraduate researchers remains one of the most rewarding parts of her job.

“I had the amazing opportunity to conduct research as an undergraduate, so I feel a bit of a responsibility to allow that for other students as well,” she said. “I enjoy the one-on-one time with a student in the lab, where they can articulate the problem and then we can step through it together. Research enables you to look at your classes in a different way. You’re able to put the principles and practice together, and I think that is really important for students to see.”