Cambridge, Mass. – August 4, 2014 – A team of engineers at the Harvard School of Engineering and Applied Sciences (SEAS), Schlumberger-Doll Research Center in Cambridge, Mass., and the University of Texas, Austin, have created a truly portable device for nuclear magnetic resonance (NMR) spectroscopy.

NMR spectroscopy is a technique that perturbs protons within a molecule to glean important clues about its structure. It can identify unknown substances, detect very slight variations in chemical composition, and measure how molecules interact, making it an essential tool in organic chemistry, structural biology, and drug discovery, as well as for quality control in many industries.

Led by Donhee Ham, Gordon McKay Professor of Electrical Engineering and Applied Physics at Harvard SEAS, and his student Dongwan Ha, Ph.D. ’14, the team has dramatically shrunk the electronic spectrometer components, fitting them on a silicon chip smaller than a sesame seed. Combined with a compact permanent magnet, this minuscule spectrometer represents the smallest device that can presently perform multidimensional NMR spectroscopy—a process Ham calls “one of the most powerful analytical tools to determine molecular structures at atomic resolution.”

Significantly reducing both the size and cost of the device—while also preserving the broad functionality of much larger spectroscopy setups—now enables the development of portable NMR spectrometers that could travel to remote sites for online, on-demand applications or simply to laboratories where massive, state-of-the-art systems would be prohibitively expensive. The chips can also operate accurately over a wide temperature range.

A paper demonstrating the use of this silicon-based chip with a compact permanent magnet will be published online this week in Proceedings of the National Academy of Sciences (PNAS).

“State-of-the-art NMR systems use very large superconducting magnets, and they are indeed necessary for probing the structure of complex molecules like proteins,” says Ham. “But in many circumstances—for example, many experiments in biochemistry or organic chemistry, quality control in production lines, or chemical reaction monitoring—you’re doing NMR on smaller molecules, and for those applications the big superconducting magnets may be avoided.”

Permanent magnets, which have been made much smaller in recent years, are weaker than superconducting magnets but still adequate to resolve small-to-medium size hydrocarbons, drug compounds, and biomolecules such as metabolites and amino acids. The advent of these smaller magnets motivated Ham’s team to try to miniaturize the electronic components of the spectrometer. Those components include the transmitter and receiver for radio-frequency signals that orchestrate complex proton motions and monitor the telltale responses that reveal the quantum-mechanical details of molecular structure. 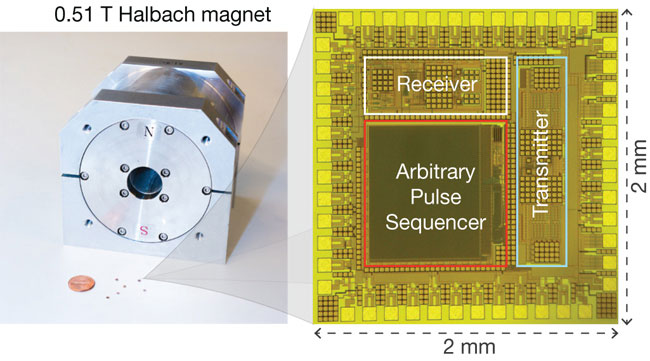 The small chips could be used in a portable spectrometer for on-demand applications in the field. Alternatively, they could be assembled in parallel to perform high-throughput NMR spectroscopy, dramatically accelerating molecular analysis in the laboratory. (Image courtesy of Dongwan Ha, Harvard SEAS.)

In comparison to superconducting magnets, however, permanent magnets are far less stable. With slight changes in temperature, the magnetic field fluctuates and drifts—a severe challenge that accompanies the system miniaturization. Ha, who is the main architect of the silicon spectrometer chip and lead author of the paper in PNAS, overcame the thermal problem with a distinctly modern tactic.

“Not only did Dongwan design the chip, but he also came up with a way to use statistical distance minimization and entropy minimization to estimate the magnetic field drift and calibrate out its effect,” explains Ham. “This signal-processing method obviates the need for physical thermal regulation for the permanent magnet, which would have added hardware and increased the power consumption. That would have defeated our aim of achieving portability.”

While Ham and Ha demonstrated the tiny spectrometer chips for portable applications with the permanent magnet, they also see potential for a completely different application in conjunction with a larger superconducting magnet. The chips, they say, could one day be assembled into a massively parallel array in a superconducting magnet bore to tremendously accelerate analysis of complex molecules by performing many NMR spectroscopy experiments at once.

“An individual NMR spectroscopy experiment is inherently slow, taking several minutes to hours,” says Ham. “Using a hundred of these cheap and small spectrometer chips in parallel within a superconducting magnet bore could counter the intrinsic slowness of NMR spectroscopy, enabling a high-throughput paradigm for pharmaceutical screening and structural biology. One year of testing could be completed in a few days. We have already started investigating this angle.”

The research team has filed for a provisional patent on the miniature NMR spectrometer, and they are exploring avenues for commercialization with Harvard’s Office of Technology Development (OTD).

“We see a strong opportunity to commercialize the IP that's emerged from this work,” says Sam Liss, Director of Business Development in OTD. “The feedback has been very positive from pharmaceutical companies involved in drug discovery, as well as from companies poised to deliver next-generation instrumentation for spectroscopy applications.”

Coauthors of the paper in PNAS included Jeffrey Paulsen and Yi-Qiao Song at Schlumberger-Doll Research Center and Nan Sun at the University of Texas, Austin. The research was supported in part by Schlumberger, Ltd., the Air Force Office of Scientific Research (FA9550-13-1-0211), and the Office of Naval Research (N00014-13-1-0806). 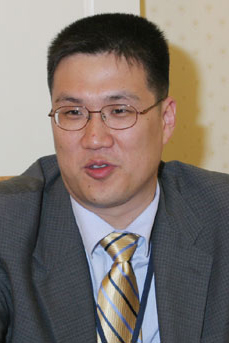