With tunes blaring from an electronic accordion and crowds gathering around a robotic midway game, the final project fair for Introduction to Electrical Engineering (ES 50) and The Joy of Electronics (ES 52) resembled a futuristic carnival.

Students in these foundational, hands-on Harvard John A. Paulson School of Engineering and Applied Sciences (SEAS) courses presented their culminating projects to peers, faculty, and staff on Dec. 8. 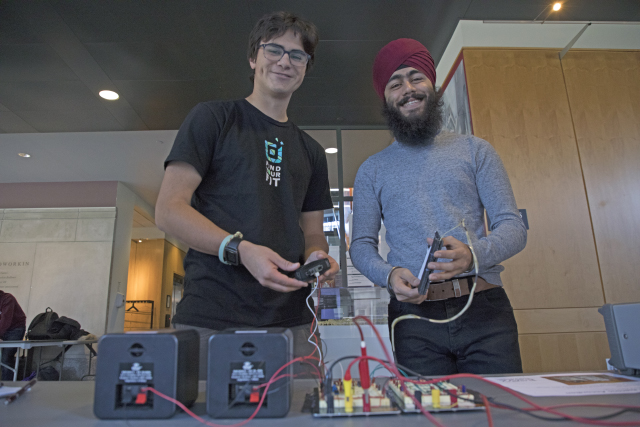 If electronics can’t make polka cool again, nothing can. Chenevey and Marta created a bellows-free accordion using paddles and a distance sensor that can play tunes based on the “squeezing” motion of a musician’s hands. A velocity sensor controls the volume, so faster movement generates louder music. The biggest challenge of the project was the tedious nature of the circuitry, but troubleshooting those challenges reinforced lessons learned in the course, said Marta.

“Our project is all about ‘the now,’ you know?” said Chenevey. “It was fun to take something that has been around for a long time and is very mechanical in nature and then turn it into something more modern and electrical.” 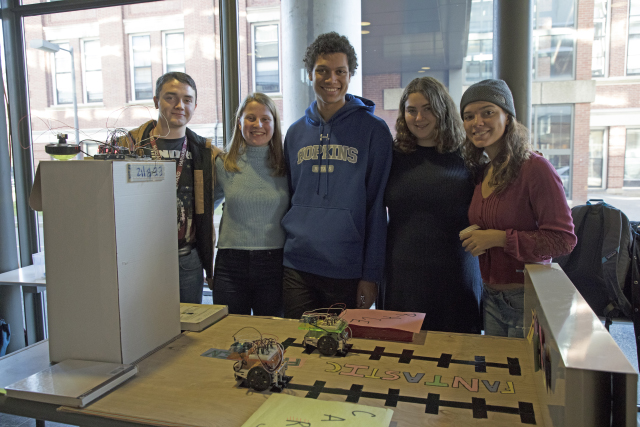 For their project, these students gave a modern treatment to a classic midway game. (Photo by Adam Zewe/SEAS Communications.)

The horserace midway game has been a staple of the Texas State Fair for decades, so this team of students decided to give it an upgrade. In their version, the “horses” are a pair of robots that move corresponding to a player’s level of hand-eye coordination. When a randomized colored light flashes green, the robot will dash forward two spaces if the player hits a button; if the light is yellow, the robot rolls forward one space; and if the light is red, the robot retreats one space.

“Computers and electronic circuits, they don’t always work exactly the way you think they will the first time,” Weiss said. “This project really taught us the value of troubleshooting. Most of our time wasn’t spent actually building, but troubleshooting all the problems that kept popping up. That is definitely something I’ll keep in mind for future projects.” 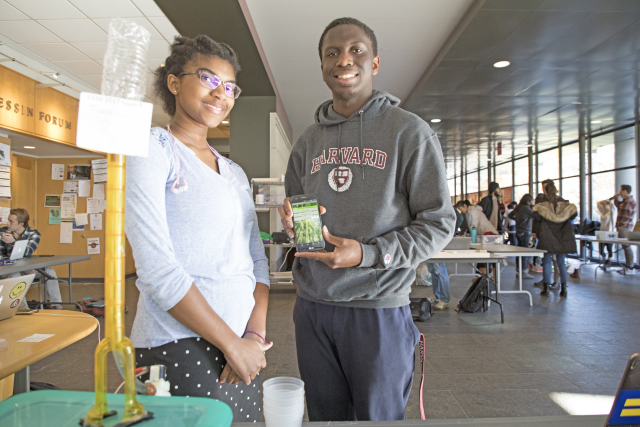 With their creation, Caines and Adewuyi hope to make life a little rosier for avid gardeners. Their irrigation system uses a sensor to monitor the moisture content in the soil and then automatically dispenses the right amount of water based on settings the user programs into an accompanying app. The app enables gardeners to monitor the soil’s moisture content remotely and select from three different water levels. Working out connectivity glitches between the app and the Arduino that controls the sensor was the biggest challenge, Adewuyi said. But it was rewarding to develop a device that could help people overcome a common problem, Caines added.

“If you are a garden owner and need to be away, you don’t have to rush back and water your plants. This provides a way to take care of your plants without much hassle,” said Caines. “It could also be beneficial for farmers. Since it is difficult to control how much water an entire field receives, this device would let them monitor areas that may be drier than the rest of the field.” 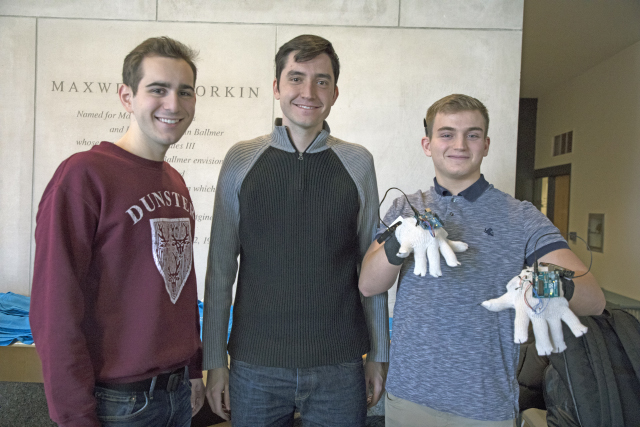 (From left) Darrin Gilkerson, A.B. ’20, a statistics concentrator, Phillip Kadaev, A.B. ’20, an economics concentrator, and Benjamin Lee, A.B.’20, a computer science concentrator created goves that let a musician play the piano on any surface with only his or her fingertips. (Photo by Adam Zewe/SEAS Communications.)

No piano, no problem. The gloves created by Lee, Kadaev, and Gilkerson enable a user to play a piano simply by tapping his or her fingers. Users select a certain set of notes to play and then press their fingers onto a flat surface exactly as they would if they were playing the keys of an invisible keyboard, Lee explained. The device, which incorporates sensitive resistors into each of the four fingers, also features a “show off mode” where the gloves will play a preselected song perfectly, no matter which fingers a user presses. Collaborating on this project emphasized the importance of precision and neatness when working with circuitry, Lee said.

“At the beginning of the year, the running joke in the class was that we were going to make this project to get invited to parties,” Lee said. “Now, we’re working on making the device auxiliary compatible, so if the music did go out at a party, all you’d have to do is hook up your glove and you’ve got it covered.” 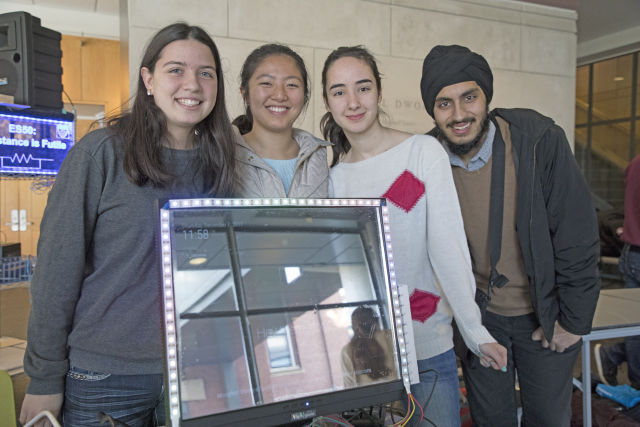 The mirror these students created is a reflection of millennials’ need to multi-task. While gazing into this magic mirror, a user also sees the top headlines from The New York Times displayed on the screen. An LED thermometer on the side displays the 10-degree range for that day’s temperature, and the system also enables a user to automatically play his or her favorite songs while getting ready in the morning. Wang, originally from California, said the motivation for the project came from her struggles to adjust to the constantly fluctuating temperatures in Cambridge.

“We learned a lot about how to put together the software and hardware sides of an engineering project, and make those elements work harmoniously,” said Gonzalez Di Tillio. “We also learned that it is really important to start very early and plan everything out and not leave anything until the last minute.”